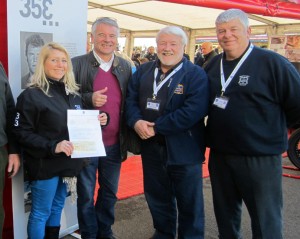 After the change of management at the famous “Friendly” Mallory Park Race Circuit, Michael had several conversations with the Real Motorsport Team, headed by Eddie Roberts and Stuart Hicken and Eddie very kindly invited us down for their Open Day on 1st March 2014.

John and Michael and a couple of other VMCC members from the North West Section travelled down for the day, which was a huge success and attracted thousands of people eager to support their new venture. Indeed it was somewhat overwhelming and Eddie and Stuart were in great demand all day.

The Open Day also offered an opportunity to raise much needed funds for a very worthwhile Charity, The 353 Trust, of which more information can be found within our CHARITY WORK pages.

Our local VMCC Section (North West) very kindly made a donation by cheque to the 353 Trust, which was presented by Michael to Sandy Lewis, (seen holding it)

standing next to Eddie Roberts, Michael and John.

Stuart, pictured, right, with John and Michael, confirmed that the former “Festival of 1,000 Bikes” previously run in conjunction with the VMCC would become the Mallory Park Motorcycle Bonanza, scheduled for the 11th to the 13th July 2014 with Track Time being able to be booked directly through Mallory by telephone or by email.