So yesterday, the team went racing.

After what has been the worst year in history for most of us with Covid-19, and family loss with Pete’s mum sadly passing away in August, Pete was out to honour her memory. Pete’s mum had attended all of Pete’s races since his comeback to racing at the beginning of last year, and Sundays races at PDMCC – Preston & District Motorcycle Club‘s first round was the first chance for the team to go racing since last October. In attendance for the team was Pete, Tracey (Petes wife), and Pete’s dad Mike. Also, assisting on the day was surprise visitor, Pete’s friend, Dan Cavanagh. 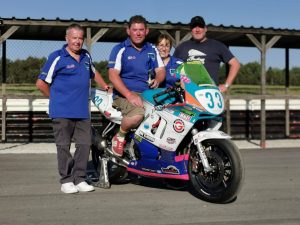 Race day morning saw the circuit bathed in beautiful sunshine. The day was set. Early morning scrutineering went without a hitch, with all of the relevant Covid restrictions being observed.

First race, Pete managed to retain 4th place, and used the track time to try a few things, and perfect his lines. The new HEL Performance callipers at the front were amazing in their braking performance, and allowed Pete to brake that little bit later than normal. 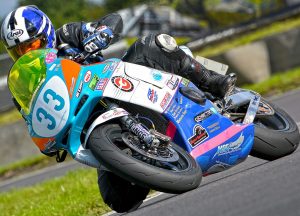 Next up was the Preinjection class. Pete hadn’t qualified as well for this race, and started in 12th place. The plan was to use the pre injection race 1 to further improve his lines. Pete’s lap time reduced during this race further. During the race, Pete moved unto 8th place.

Finally came the race that the team had been geared up for. The Steel Frame trophy race.

Pete started in 10th (despite having a better finish than 10th over all in the qualifying race-not sure why the grid wasn’t updated, however), and was hot on the heels in the first corner of Jon Beck and Deklan Blundell (3/2 in the class). The race settled in for 2 laps, then it was time to make a move. Into the tight L/H hairpin, Pete took the wide line in, which gave drive up the hill out of the hairpin, and just before the start of the esses, Pete had moved up to 3rd place. This then meant that defensive riding was the order of the race.

On the final lap of the race, going into the esses, Pete missed a gear, which allowed Jon to attempt to come past. Pete held his line, found the gear, and pulled forwards. Coming out of Lunar, a long, 270′ Radisu bend, {etc was just about to hook up into 3rd, when again, he didn’t have his foot quite right, and missed the gear. Jon was waiting to pounce, but luckily, Pete managed to secure the gear, drive to the line, and retain 3rd place by 0.106 of a second. Today was Pete’s day ( or more his mum’s day), but next time out, we think that the racing between Pete and Jon will be a lot closer…….

As you can see from the pictures, the bike looks fab, the team set up (new canopies supplied by sponsor JT Sprockets) The teams new work bench/tyre stand is very professional looking, supplied by Sealey Tools, 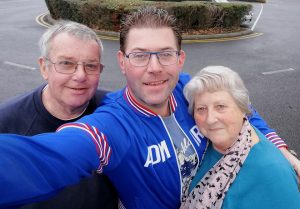 Also racing on Saturday and Sunday, was the teams sponsored rider, Joel Haire Racing #46. Steady 4ths and 5th’s throughout the weekend saw Joel’s performance at a track he hadn’t raced at before improve. 3rd place next time, champ ! 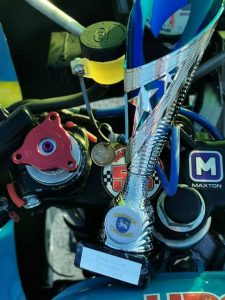