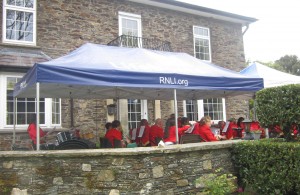 When John and I accepted the invitation to visited the IOM in May 2015 to join our VMCC friends and colleagues for a track day at Jurby we were also invited to a local fund raising event in aid of the RNLI (Royal National Lifeboat Institute).This is one of the very important organisations and charities that I have always helped, both before I ever even owned a boat myself and one that I have continued to support ever since,despite having sold my boat many years ago. They are, without shadow of doubt, the Charity that saves lives at sea.

The event itself was hosted by a wonderful family within the grounds of their magnificent residence, not far from Ballaugh and John and I (despite being the only ones to arrive on noisy motorbikes rather than in luxury cars) were made most welcome indeed.

A nominal entrance fee helped the fund raising and there were various side stalls laid out around the garages, outhouses and buildings that surrounded a beautiful courtyard, the house itself was magnificent, with beautiful mature landscaped grounds through which flowed a 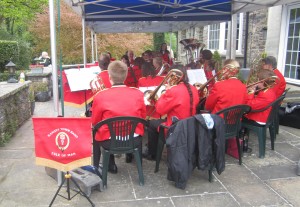 stream into a huge pond. A fallen tree had provided the perfect raised stump, that had been carved by a local craftsman into a huge owl, which was a wonderful centrepiece and a site not to be missed.

Volunteers manned the various stalls where one could enter into the spirit of things, purchasing all manner of items and inside the huge outbuildings you could sit down, take a rest and sample the delicious sandwiches cakes and cuppas kindly supplied by RNLI supporters and members of the lovely family with whom we lodge every time we travel over to the island.

Visitors were free to stroll around the beautiful grounds whilst listening to music played by the Ramsey Town Brass Band who were comfortably settled on the side patio of the main residence beneath an RNLI gazebo.

John and I joined in with the spirit of the afternoon and contributed towards the event and even won a couple of small gifts with our raffle tickets, which we donated a certain hard working younger volunteer

t was a lovely afternoon and we were pleased to learn afterwards that a rather substantial amount of money was raised from the event. I believe that (being completely surrounded by the Irish sea) there are some five lifeboat stations located around the IOM and that, at the time of writing, they are currently seeking to raise £200K towards a new Lifeboat Station at Douglas and a pontoon berth at Port St Mary.

Sadly the rain started in the late afternoon, but not enough dampen our spirits or spoil the event, we just got rather wet riding back to Douglas.

Should you wish to learn more about the RLNI (a Charity registered in England and Wales No.209603) and/or make a donation further details can be found at www.rnli.org or they may be contacted at RNLI, West Quay Road, Poole, Dorset, BH15 1HZ. Tel. 0845-122-6999