One Man’s Dream, and no ordinary man at that 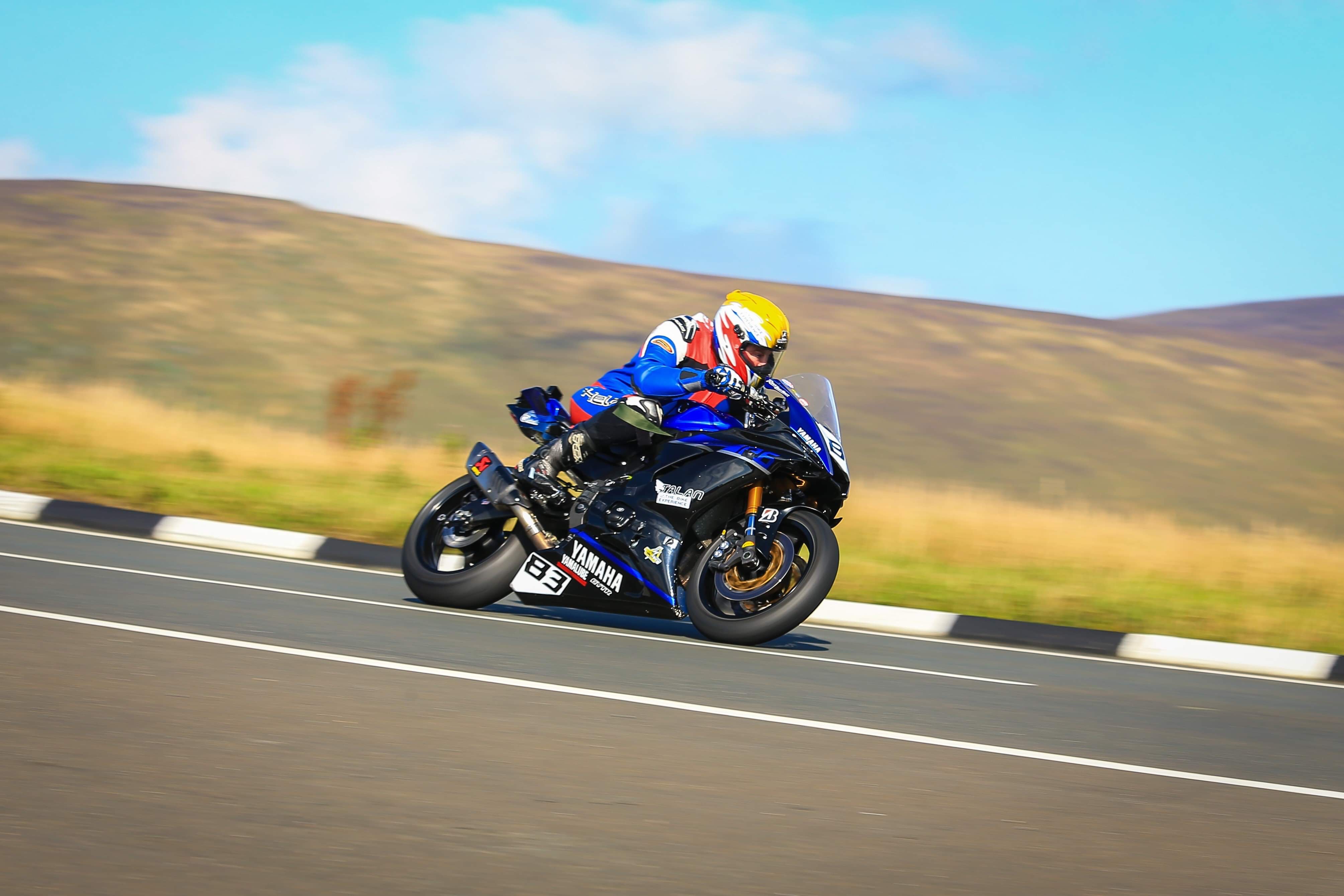 Up until the 26th August 2019, only one paraplegic had managed to complete a full lap of the Isle of Man TT course on closed roads whilst riding a two wheeled motorcycle. The rider, an ex TT winner and previous regular racer on the island, had taken four attempts to successfully get around the 37.7 mile course. At 4pm on the Bank Holiday Monday, another paraplegic set off to prove that anything is possible. On only his first visit to the island, Talan Skeels-Piggins safely managed to lap the historic course as part of the 2019 Classic TT Parade Lap. He took just over 25 minutes, giving him an average speed of 90mph and reached a top speed of 142mph.

Paralysed in a motorcycle accident in 2003, Talan decided to try to get back on a motorcycle in 2008. Buying a bike, adapting it and then heading to an old airfield, he was able to ride the bike for just five minutes before falling off whilst attempting a slow speed turn. Not deterred by the mishap, he then went to Castle Combe where he gradually improved by riding around the circuit during the track day launch breaks. From that point there has been no looking back, and Talan has gone on to become: the first paraplegic to gain an ACU licence and compete against able-bodied racers, an ACU Race Instructor, 2018 600cc World Champion (paralysed class) and founder of The Bike Experience Charity (a charity which teaches disabled people how to ride motorcycles).

In 2011, having got his ACU Hillclimb and Sprint licence, Skeels-Piggins looked to parade around the TT course in an attempt to increase awareness of disabled motorcyclists, the charity and to help inspire others to reach their own goals. Eight years later he finally got his chance to show the motorcycle community that even someone paralysed from the chest down can ride and race two wheels. 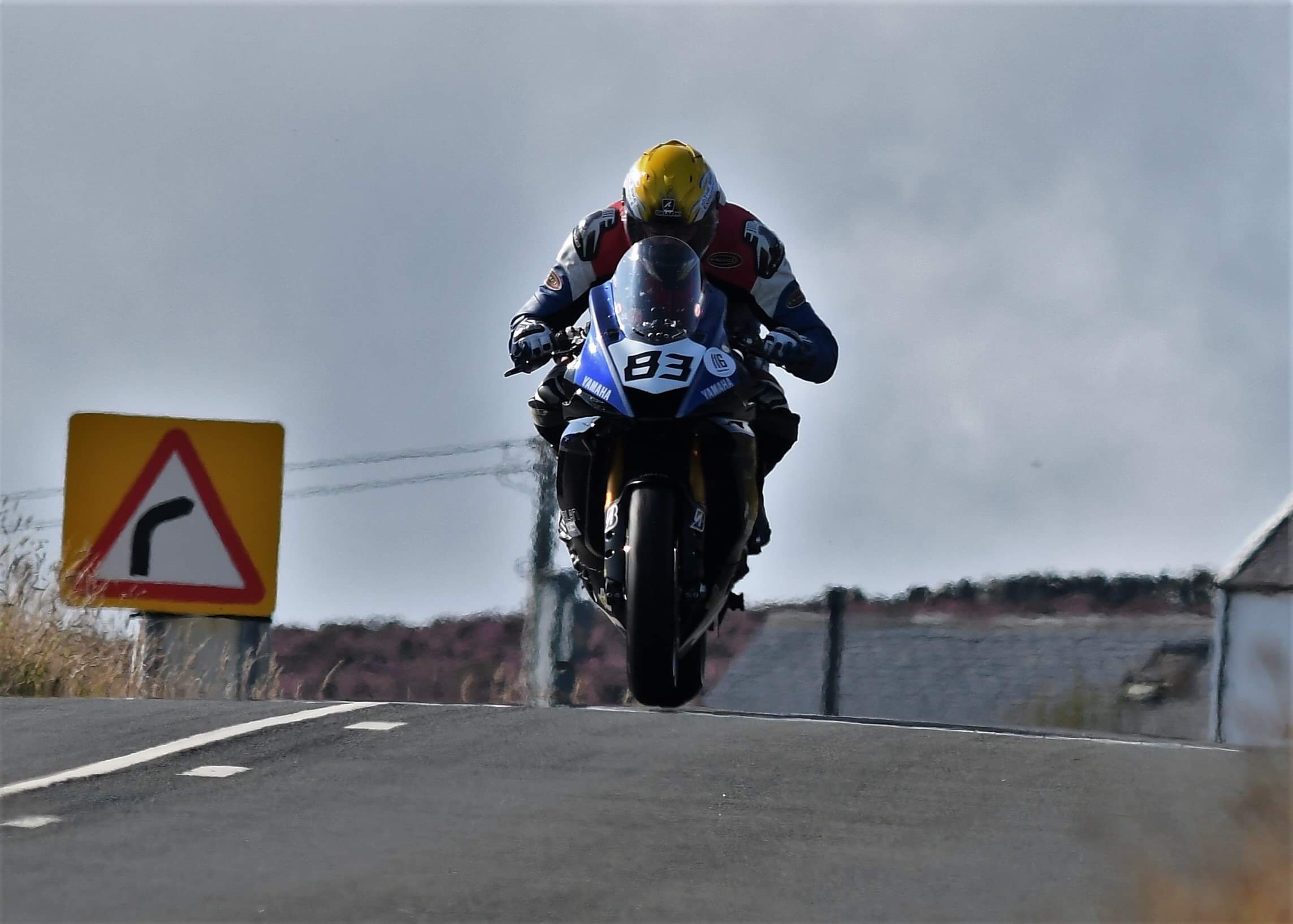 Talan says,”When I am on the motorcycle I feel the freedom and excitement I always used to. For the time I am sat in the saddle I am free from my disability, I focus on the road ahead which makes me forget about the pain my body is constantly in, I am simply a rider or racer.”

Taking nearly four years to get the ACU to allow him to race against able bodied racers, Talan has proved it is possible for the sport to be fully inclusive, and the UK leads the way in motorcycle race provision for disabled riders. A number of other countries do not allow certain disabilities to compete with able bodied racers and they have to form their own championships. Talan thinks that once the wheels are turning you are either a racer, or you aren’t, and that there shouldn’t be any discrimination from physical ability or any other label that gets attached to riders.

Arriving on the Isle Of Man on the Thursday before the parade lap, Talan and his mechanic (Darren), set up a small display gazebo in the paddock of the Classic TT in order to show the adapted bike to visitors and racers alike. The race bike, a 2018 Yamaha R6, has minimal adaptions, so that when he is racing he looks just like any other racer. There are four basic adaptions – toe clips with velcro to stop feet from falling off the pegs (Talan puts velcro on the bottom of his race boots too), velcro straps coming from the frame of the bike (which attach to the velcro patches where the knee slider would be), an electronic gear shifter (operated by two buttons on the handle bar) and a thumb operated rear brake. In order to start and stop the disabled racer uses two helpers termed ‘launch crew’, who lift him onto the bike, put feet on and strap knees in, then take him off the paddock stand, and launch him by holding onto the rear of the bike as he eases the clutch out and pulls away.

Building up to the actual event, Skeels-Piggins lapped the course as a passenger in a car with race officials and then drove the course after practice had stopped in his van. Each time trying to memorise more of the course and identify the areas of concern. “Watching it on tv is one thing, driving it for real is another, and I imagine riding it at pace will be even harder.” he said.

On the Monday, lining up on the starting grid, Talan was to set off at the back of the first group of parade lap riders. The group included some famous names in motorcycling: Agostini, McGunniess, Fogarty, Plater, Parrish, Nation to list a few. The pressure was on to get around the course without any issues. The main areas of concern were Ballagh Bridge, Ginger Halls, Ramsey Hairpin and Governors Dip. All these sections could catch him out as he has no core stability or balance. Taking a calculated risk, the team added an extra lap strap which went under the seat unit and held him down on the bike. If he should crash, Talan would now be held on the bike. The last time this happened was in 2013 when a greater amount of velcro was used across the knees. However Talan high sided at turn one at the Assen race circuit, the bike flipped twice in the air with him remaining strapped to the bike, resulting in two shattered legs, smashed pelvis and severe internal injuries which nearly cost him his life. So this was a big thing to do. 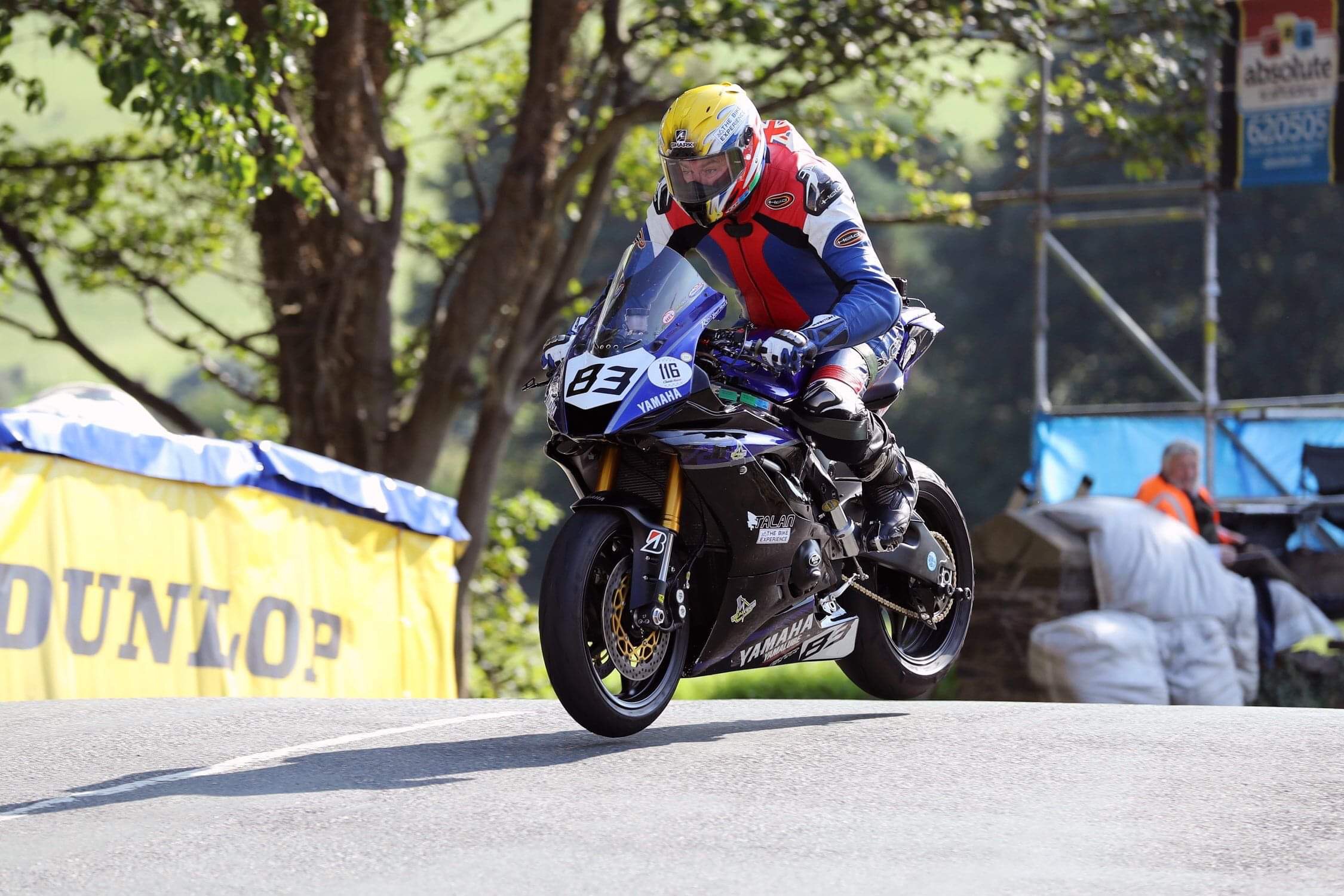 Nigel, the paddock manager, lined up alongside Talan to lead him around the course. Unfortunately Nigel had not realised that the 48 year old racer next to him had no intention of slowly pottering off down the start/finish straight to Bray Hill. When the time came to begin, they got the hand on the shoulder from the start official, the instruction of ‘In your time’ came out of the officials mouth, but he had hardly uttered the final word before Talan released the clutch lever and pinned the throttle wide open. Taking the bike to the red line in the first four gears, he left his guide behind as he reached 100mph in no time at all! He never saw the guide again.

“As soon as I left the start line I began to smile, and I haven’t stopped smiling since.” Talan says. “Being able to follow in the footsteps of the greatest racers in the world has been a massive privilege and honour. I have no idea how the top racers manage to lap in excess of 130mph, their skill level focus and courage is incredible. All the bumps and lumps of the course are magnified at pace, something you barely notice in the car at 40mph becomes a launch pad at 120mph. I am in awe of them.” 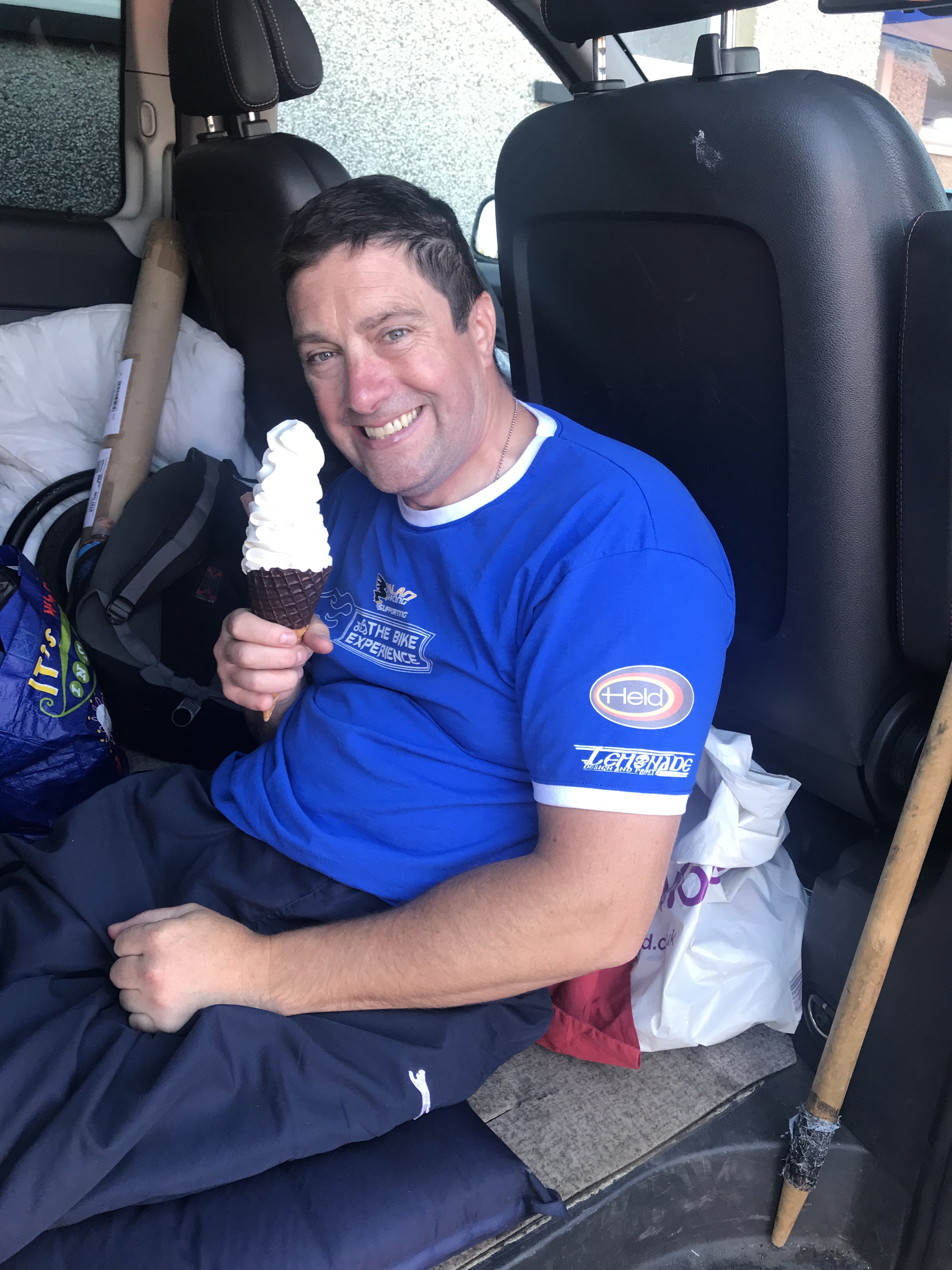 Just over 25minutes from pulling away, Talan recrossed the finish line and his lap was at an end. Pulling into the return road he was greeted with confusion to begin with (as he was caught and the bike put on a paddock stand), then the confused silence turned to cheers and applause when the spectators saw him lifted off and returned to his wheelchair. He had achieved his goal, after eight years of perseverance he had completed the TT lap on the first attempt, and shown that the human spirit can overcome even the tallest of mountains, or even the Mountain Course.

Lets hope we see Talan back next year