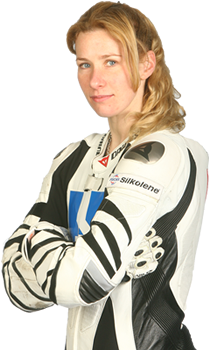 Jenny is also the first and only female competing in the British Superbike Championship.  For which she was also awarded a Guinness World Record. 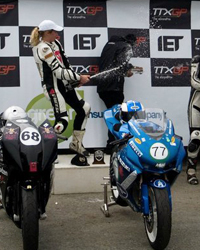 She is the first female to lead and score points in a British Championship race, with her leading a 125gp race aboard her Honda RS125 at Brands Hatch in 2004 fighting from 19th on the grid to 1st place before crashing out and then, two rounds later, finishing in an amazing 10th at Mallory Park fighting from 20th place on the grid, despite dislocating her left collar bone the round before at Knockhill and being in some discomfort.   She was the first to stand on the podium with a 3rd place finish in the Supersport Cup Championship at Croft in 2009 and the first to win a British Championship Race with a win in the Supersport Cup at Silverstone in 2010.  She completed the 2010 British Supersport Cup Championship with the most points and would, in any previous year, have been the British Supersport Cup Champion, but unfortunately for Jenny this season was the first year of a new points count back system where riders dropped 2 rounds results, so in line with the new 2010 rules she was demoted to 3rd overall, however this was still a great result and was still the highest championship finishing place for a female competitor.  She is also the first British female to race in World Supersport and the first to race a full blown Superbike when she was invited to race for Rizla Suzuki in 2007 as team mate to now Moto Gp star Cal Crutchlow in the Race of the Year at Mallory Park. 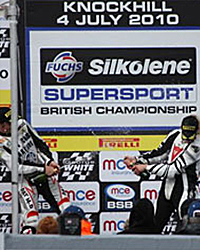 In 2011 Jenny began racing in Superbikes full time entering the British Superbike Championship, racing for the Splitlath Motorsport Team, but left the team after just three months due to a lack of testing, track time, parts for her machine and a huge spell of disappointing mechanical failures. Jenny ran her own CBR600 Supersport machine for the rest of the 2010 season and began running her own British Superbike Race Team – Two Wheel Racing in 2011 running a Honda once more under the name of her main sponsors Hardinge and Sorrymate.com, making her the first ever female British Superbike Team owner. 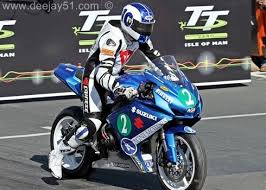 Jenny also won the first ever UK Electric Bike, Zero Emissions, Racing Championship the ‘TTXGP’ in 2010 as well as finishing 3rd in the World Electric bike racing Championship in Almeria the same year aboard her Agni built Z2.  She also finished an extremely creditable 4th place in the TT Zero race earlier in 2010 at the Isle of Man TT despite the first race lap also being the first time jenny had ridden the bike in anger due to its late build completion.

Jenny has achieved many accolades as well as her Guinness World Records, in 2012 she received The Women’s International  Film and Television Showcase, International Visionary Awards ‘IT Girl’ awarded in Los Angeles, for her commitment and dedication to her sport, sighting her as an inspiration to women across the spectrum of all ages around the world.  She also received the most Meritorious Performance by a Solo Newcomer Award at the TT in 2009 and the Susan Jenness Trophy in both 2009 and 2010 for the Most Meritorious Performance by a Female Competitor at the TT and has also received two ‘Your Champions’ Sporting awards.  In 2013 she was extremely privileged to be invited to the Women of the Year Awards in London, an extremely prestigious awards lunch celebrating the success of very extraordinary and inspirational women from all aspects of life. 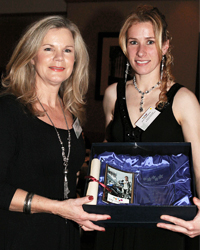 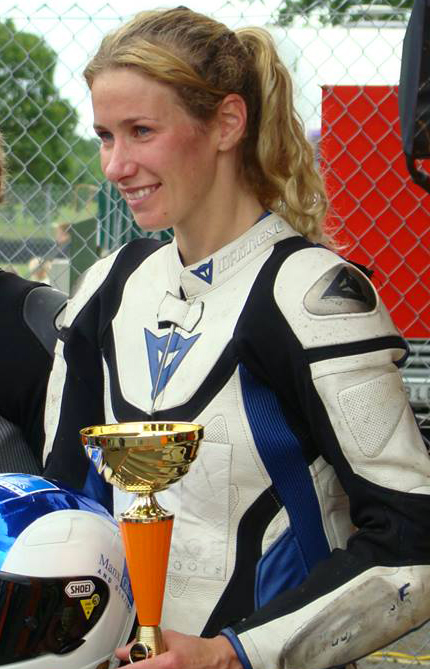 Jenny has also finished 3rd in the EMRA club championship, winning many Championship Races, as well as wins in many Club races and in the Thundersport National Championships, she also won both BikeSportNews backed ladies races in 2008 during her first race weekend aboard her CBR600 after moving to 600’s from her 125.

Jenny has had 36 podiums including 16 wins during her racing career so far. 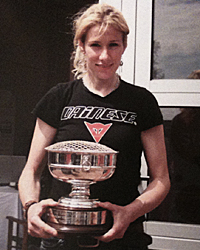 Visit  http://www.jennytinmouth.com/index.html and you can keep up to date with all Jennys racing activities, results and upcoming events. Jenny Tinmouth is the first and only female to have raced in the British Superbike Championship, is the female lap record holder at the Isle of Man TT at 119.945mph and is proud to hold two Guinness World Records for these achievements. She has achieved many first for women in the sport and has gained many accolades and awards on her journey through the racing ranks. More recently Jenny has been privileged to be employed as a stunt performer for blockbuster films, prestigious car manufactures and for TV and youtube.

In 2020 Jenny is hoping to run her own privateer team once more, Two Wheel Racing – you can visit our team website at www.twowheelracing.co.uk as well as providing motorcycle Service, Repair and MOT services at www.twowheelworkshop.com