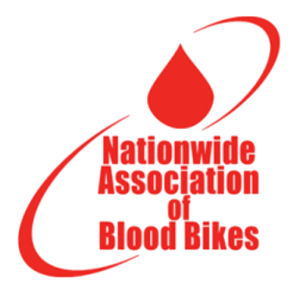 A “Blood Bike”  is a motorcycle used to courier urgent and emergency medical items including blood, X-rays, samples, drugs, and documentation between hospitals and other healthcare facilities. It is an essential, (but often unrecognised) part of the valuable healthcare that we receive in the UK.

NABB (Nationwide Association of Blood Bikes) http://www.bloodbikes.org.uk is a registered charity, in common with all of the blood bikes groups in the UK, of which there were around 30 groups or sections at the time of writing.

Each of these groups needs to have funds to run their service, and NABB itself is no different. Funds raised by and donated to NABB go to support the national structure, including subsidies to groups for various items such as uniform and insurance and so NABB needs to raise funds to continue to do this. At the time of writing, NABB needed approximately £30,000 to operate and support the groups around the country and they therefore need to receive donations to support this structure. 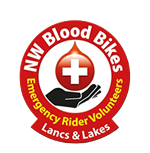 Like each of its local groups, NABB is run by a small committee of members from its member groups, they receive no remuneration and are, like local groups, all volunteers.

In July 2017 the lads from one of our local sections (The North West Blood Bikes, Lancs & Lakes Section) were invited to join us at a BBC Radio Lancashire outside broadcast and motorcycle gathering event that we had organised at the British Commercial Vehicle Museum in Leyland, Lancashire.

For more details of this fun afternoon take a look at “Gilly’s Classic Motorcycle Afternoon with John’s Motorcycle News at the Commercial Vehicle Museum, Leyland”  in our ever popular “Events and Shows”  section. 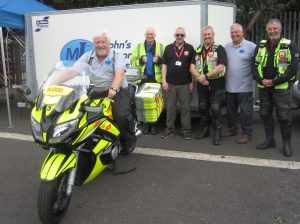 comparison between the differing livery of the Blood Bikes and the Police Bikes that also came along to join us.

Both sets of bikes drew a large audience and with the lads on hand to answer a lot of questions the visiting bikers and the many members of the public that came along on the day had plenty to keep them occupied and well informed.

The afternoon also afforded the various organisations to have the opportunity to chat with John Gilmore (Gilly) of BBC Radio Lancashire, live on air  during his afternoon broadcast radio show and, as can be seen, the opportunity for us to try out the bikes for size as well!

One of the people that Gilly interviewed that afternoon was the Chairman and Trustee of the NW Blood Bikes (Lancs and Lakes section), Paul Brooks, who has been with NWBB since inception in 2012 and this gave him the opportunity of telling everyone about the tremendous job that these volunteers do for all of us.

Paul explained that the NWBB (North West Blood Bikes) is a non-profit making Charity staffed by volunteer and that when they first started they had just 20 riders, but this had grown to about 350 volunteers, of which about 200 of them are riders.

They started with about 800 calls per annum, but now have about 37,000 calls a year, covering an area from Barrow in Furness in the North, down to Wigan in the south of the County. Coverage from the east is from around Blackburn to the west coast, Southport and Blackpool, which is quite a considerable area of the country.

As well as blood, they can carry anything needed in an emergency that will fit into their bikes, including important Doctor notes and the like. Some of their members ride their own bikes, however NWBB now have 24 liveried emergency bikes (possibly more than Lancashire Police have themselves) of their own. 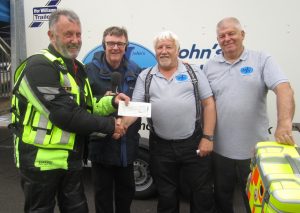 Riders of the emergency bikes have to be “advanced riders” who have successfully completed a “blue light” training course, as they may be called upon to deliver urgent medical supplies and then require the same authority as an conventional ambulance would have.

John and I continue to support many worthwhile causes and assist in fund raising for a wide variety of Charities, where and when we can.

We sincerely hope that we are never in need of the emergency services that these volunteer riders provide, suffice to say that it was our absolute pleasure to be able to make this 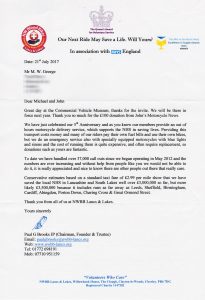 contribution and help such a very worthwhile cause.

The NWBB is only one of the many groups around the UK, all are volunteers and all of the regional groups are in need of any additional funding that they can secure in order to continue to operate the brilliant service that they provide.

Many of us take for granted the fact that blood for transfusions, X-Rays, medical supplies and medical records will quite simply, just be available when required and never think that they may have been transported to the hospital by one of these volunteers, riding their Blood Bikes any time of day or night through all sorts of heavy traffic and bad weather.

These volunteers are the unsung heroes that ensure that either ourselves and/or our loved ones are receiving valuable medical treatment, which we often take for granted in keeping each and every one of us in good health after an illness or accident.

We would ask you all to seek out your own local Blood Bike Section and get to know them, get involved and see what you can do to help them.

Shortly after our event I received a very nice letter from Paul Brooks acknowledging our donation, which was very much appreciated.

The letter also provides some additional and very interesting information about the North West Blood Bikes.

Should you wish to get in touch, contact details for NWBB are as follows:-

For more details as to how you may be able to help NABB and/or details of your own local section, please visit www.bloodbikes.org.uk