John has long been huge fan of Triumph Triples and owns several of these machines himself, he fell in love with these bikes in his teens, but at that time could only dream of owning one. John’s passion for triples was re-kindled when he started to re visit the Stafford Bike shows around 2001 and saw them on display in all their, glory and that was it – he had to have one!

The first one that he bought was a 1974 slab tank Trident and what a bike, with a sound that makes the hairs on the back of your neck stand up! He soon discovered, however, that one was not going to be enough and a U.S.A specification Trident soon followed, along with a Mk1 Rocket 3, then a U.S.A specification Mk2.

So with four triples now tucked up safely in his garage, he thought that was it job done !!

That was, of course until he had a phone call from a friend who gave him a number of a chap that was selling a triple in Northwich. John was amazed to find that the bike was a rare “Les Williams Legend” – only 60 were built and this was No.28, a beautiful one-owner bike with only 3,200 miles on the clock, a dream come true for John. 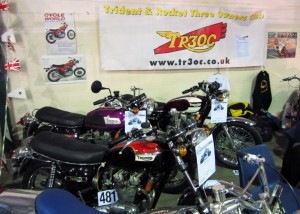 It now has pride of place alongside the others. Over the years John has displayed his triples at Stafford in the concours private entry area and on Club stands. The photo, here, was taken in October 2015 and shows his U.S.A spec Trident (entry No. 481) on the Trident & Rocket 3 stand on the balcony of the main hall.

The TR3OCitself was established in 1979 and caters for all BSA and Triumph triple engine road and race machines manufactured between 1968 and 1976, plus specials and race bikes that are clearly related to the original machines. Models covered are BSA Rocket 3 A75, Triumph Trident T150, Triumph Hurricane X75 and Triumph Trident T160.

The Club actively encourages continued and regular use of these machines, their ongoing construction, development and use of specials and race versions.

It participates in a wide range of “Classic” events and organises a variety of meetings and rallies, the best known of these being their annual BEEZUMPH, Rally/Track days, usually held at Cadwell Park or the Anglesey Circuit, where Club members have the opportunity to ride their road machines, or race bikes on a race circuit.

The TR3OC has also accumulated an impressive array of material within its archives that can help members with a wide range of information and specialist technical advice, consequently they have built up a wealth of experience and knowledge that is available to help members keep their machines in tip top condition for use on the road or track. Members also benefit from access to a broad mix of technical, historical and event information available from the Clubs website www.tr3oc.com and the Clubs bi-monthly magazine “Triple Echo”.

To learn more about the Trident & Rocket Three Owners Club, or to join theClub, visit www.tr3oc.com .

There is also a dedicated website for the BEEZUMPH Rally at www.beezumph.com