And we are back with @jm130tt and @Jimwhit69 soon too for some @bikesnbanter
Lancaster, Harrogate, Hudds and Hull. See you there xx

Not the best way to handle a car parked in the way but still them little 2.7 ton @wackerneuson_uk @WackerNeuson tele handler are capable machines #dontTryThisAtHome
Even if u want to

The British Commercial Vehicle Museum, mainly run by volunteers, really is a jewel in Lancashire’s crown and a great place to visit. It is “home” to one of the finest collections of commercial and transport vehicles in Europe, spanning several historic decades. 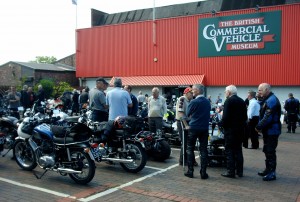 These include periods ranging from horse drawn buses, steam driven lorries right through the very latest diesel-electric hybrid trucks designed for low emission city centre use. Most of the vehicles are in full working order and you will even find the “Pope mobile” inside!

The museum building was originally part of the world famous Leyland Motors factory where, in the days before manufacturers had appointed dealers, customers would collect their vehicles direct from the factory, pictures displayed on the walls show the building in the 1930’s with coaches and lorries awaiting collection.

Throughout the season, a programme of events provide opportunities for motor and motorcycle clubs, societies and individuals to display their vehicles in the museums car parks. 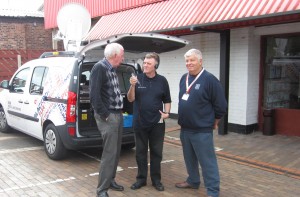 These are great social occasions and encourage people to visit the museum, which help preserve the wonderful historic collection within.Our local VMCC section and other like-minded motorcyclist’s have long supported this wonderful museum and have been pleased to display their bikes there over several years.

During one of John’s regular chat show spots with Gilly (John Gilmore, BBC Radio Lancashire’s award winning presenter) we discussed the possibility of promoting the Leyland museum further by holding a bike event in conjunction with a “live” outside broadcast. The idea was put forward to Rick Roberton, one of the museums trusties and they were absolutely delighted.

On the 18th Sept 2015 bikers came from miles around to support the museum and our event, which was a huge success for all concerned and attracted over 80 bikes throughout the day. A lot of riders were VMCC members,however a special thanks and mention must go to all of the following people for their wonderful support:- 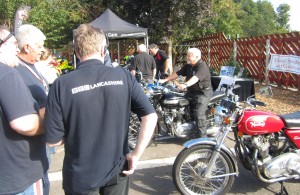 VMCC members from North West, Cheshire Cats, Cheshire and North Wales, Central Lancs, Blackpool and District and East Lancs Sections, the latter of who actually diverted a planned ride out to be with us. We were also supported by a national girls bike club, the Curvy Riders, John and Sonja Young (of Iron Butt Rally fame), Dave Norcott who brought a lovely display of speedway bikes, Phil Austin who kindly displayed his immaculate V12 E Type Jaguar, Angie and the Blood Bike crew who set up a display and Mistral Racing who brought one of their race bikes, fresh from the Classic TT in the Isle of Man. 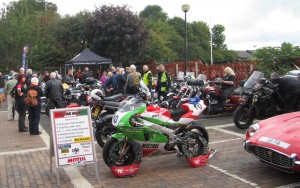 Many of those mentioned also had the opportunity to talk about their riding experiences with Gilly “live, on air”and if we add to this the experience that Gilly will never forget when Steve Parker gave him a ride in his Sunbeam outfit you can see thata really great day was had by all. Such was the success of the day that there was high demand for another such event, which is now planned for Fri 22ndJuly 2016.