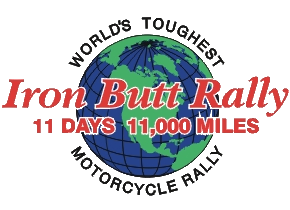 How would you like to take a 1969 Triumph Trident over to the U.S.A and ride
11,000 miles in 11 days,
through 48 States in all kinds of weather and conditions?
Sounds crazy, doesn’t it – but John Young did & much more since !

John Abram met John Young several years ago due to their common interest in Triumph and B.S.A triples. His knowledge of triples and his collection of bikes and literature are awesome and when John bought his Triumph Legend, John Young was his first choice for knowledge and information.

In 2014 we invited John to visit our local VMCC section to give us a talk about his adventures and sure enough he rode up to the North West, accompanied by his wife Sonja riding her Triumph trike. It was tremendous to see the actual 1969 bike that (complete with all the modifications) enabled him to compete, and actually finish, the Iron Butt Rally, much to the surprise of many other competitors on far more modern, comfortable and powerful machines. It was a great evening and a very late ride home for John and Sonja, who refused to take anything for their time and expense, but instead were happy for the section to make a donation towards the of their choice, the Donna Louise Children’s Hospice, www.donnalouisetrust.org

We were absolutely fascinated with John’s modifications to this late T150V, which from memory included a full engine overhaul, a modified “bread bin” fuel tank (cut down the middle with an extra strip inserted) to increase its fuel capacity to nearly 7 US gallons, and an enlarged oil tank to cope with the very high temperatures expected (and then experienced) in the Mojave desert. These modifications alone cause weight ratio and balance problems that John had to contend with.

A ¾ Windjammer fairing with as many electrical “bits and bobs” (spare coil, electronic box etc) mounted up front, panniers, two sat navs and at least three time clocks fitted, (to cope with the changing time zones and keep track of the start and finish times) and goodness knows how many spares and tools to cope with the unexpected.

The bike had a total re-wire to separate various circuits, Boyer ignition, an uprated alternator, modified lighting, air horns and for comfort (having to sit on it for some 18 hours per day over 11 days), repositioned footrests and a new single, well padded seat! 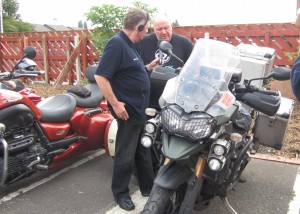 The story of his journey was fascinating, riding long and hard, often sleeping on the ground next to his bike, through all kinds of weather, even having a cold shower and packing his jacket with ice to ride across the desert, being bone dry by the next stop!

John’s account is a truly fascinating story of long-distance endurance riding in the extreme.

In 2015 John rode up to the Leyland Museum for our outside broadcast and was interviewed by Gilly (John Gilmore) of BBC Radio Lancashire, again he was accompanied by his wife Sonja riding a Triumph trike trike but this time he was riding his modern (and again very modified) Triumph Explorer. At the time of writing he was off again riding in the Tuareg Rally in Morocco.

To learn more about his Iron Butt adventures why not visit:-
http://www.craigvetter.com/pages/Vetter_Fairings/Windjammer-3/John-Young.html