Visiting the IOM outside Race Weeks 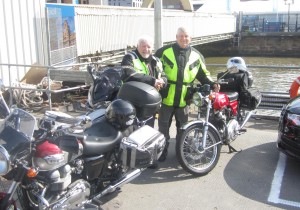 A lot of motorcyclists will have traveled to the Isle of Man for the TT and/or the Manx GP, but may not have considered riding in the Isle of Man at other times of the year.

During our visit to the 2014 Classic TT, John and I began exploring the possibility of such additional visits after our good friends in the IOM section had invited us to join them for one of their track days at Jurby during 2015.

John and I decided to take advantage of the invitation and we traveled from Liverpool over to Douglas on the Steam Packet Company’s high-speed boat the “Manannan”  on Friday 15th May 2015. On the afternoon of our arrival we enjoyed riding the full island course and many of the IOM’s wonderful roads, (with noticeably much less traffic than at event times). Albeit there was a tremendous change in the weather from that of the west coast roads, as it becameextremely windy and rather grim when riding back over the mountain road. 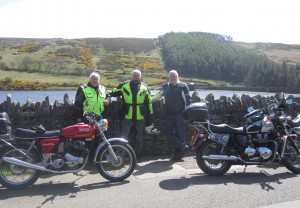 On the Saturday we rode north to our friend Steve’s and then we all took a lovely coastal route around the north of the island to Bride, then heading west past Jurby to Ballaugh.Steve then took us inland through Ballaugh Glen with views of the islands reservoirs eventually emerging around Bradden. After lunch we visited Tony and Pat East at the fabulous A.R.E museum in Kirk Michael and then whilst Steve headed back to Ramsey to prepare one of his many Ducati’s for the track day on Sunday John and I headed down the coast to have an ice cream at Peel. We then took the road through Glen Maye and Dalby, across the Slock to Port Erin in the southern part of the island to sit in the sunshine before heading back to Douglas via Castletown. What a great days riding!

Sunday was cloudy and blustery, but thankfully the rain held off until very late in the afternoon. We met up with Tony, Steve and the lads at Jurby airfield and were made very welcome by all of our IOM colleagues. The day was a well-organised informal event of many 15-minute track sessions allowing us both the opportunity to experience the Jurby track. Vic Bates (Professional photographer & VMCC member) took some excellent photographs, which he kindly sent to John and I after we returned home. It wasn’t a competition and no one was trying to outdo anyone else. It was just a very enjoyable opportunity for us to ride the track with our friends and colleagues and we thoroughly enjoyed it.

John and I had also been invited to an RLNI fundraising event just outside of Ballaugh in the grounds of a magnificent private residence where we contributed towards this very good cause and enjoyed the hospitality offered whilst being entertained by the excellent Ramsey Town Band.The rain eventually came in, but not before the event had come to a close and we headed back to Douglas. 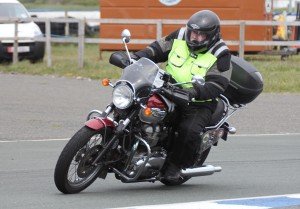 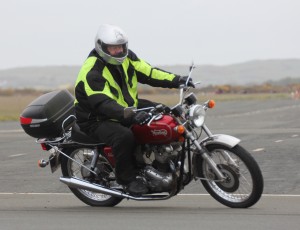 Monday morning it was raining, but the Gods were good to us and it brightened up. Lunch was fish and chips sitting on the headland outside Port Jack Chippy, overlooking Douglas bay, before heading back to join the Manannan to sail back to a rain soaked (but by then, actually sunny) Liverpool.

We would highly recommend riding in the Isle of Man at a time of year when the roads are quieter and would sincerely like to thank Tony & Pat East, Steve Price, Vic Bates and all of the other IOM VMCC Section members who made us so very welcome and allowed us to share their event with them.