As a natural progression for John (or obsession, as his very understanding wife says) with Trident’s and Rocket 3 triples, one of his own dearest wishes was to own a “Slippery Sam” replica or a Rob North race bike like those that we have seen displayed at many a classic show.

We are both well acquainted with Joe Johnson and John has known him personally for many years. Joe has organised many wonderful displays of Rob North triples at Stafford, Cadwell and Mallory and we have both had some great weekends in the race paddock with Joe, Pete and the rest of the like-minded triple owners 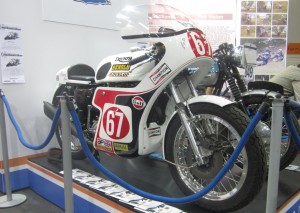 Joe was well aware of Johns hankering for a “Slippery Sam”, there were lots to choose from, but John only wanted one that Les Williams had built. Les had made lots of T160 replicas, but only two T150’s like the original, so it didn’t look as if John’s dream would come true.The only T150 that Joe knew of was not for sale; nevertheless about one year on he introduced John to its owner, who agreed to call him if he decided to sell it.

Over the next 5 years or so John often met Slippery Sam’s owner at shows like Stafford, they became friends and often talked about the bike until one day he told John that he had decided that the time had come to sell the bike and he could not think of a more deserving owner.A deal was struck and John became the proud custodian of this genuine Les Williams built “Slipper Sam”, shown here on display at the VMCC stand at Stafford.

But the story doesn’t end there – through our association with enthusiastic triple owners, an irresistible opportunity presented itself for John to purchase a “John Cooper” Rob North B.S.A Rocket 3, ideal for displaying in the race paddock with the bikes owned by the rest of Joe Johnsons friends and colleagues.

As can be seen from the photos John has proudly displayed and run the bike for the delight of all triple enthusiast accompanied, at times, by John Cooper and Alex George.

Is this the completion of John’s collection of triples? Who knows, as John says ….. “watch this space”!

For those of you who are not familiar with the name “Slipper Sam” and how it originated, to find out more why not visit  https://en.wikipedia.org/wiki/Slippery_Sam 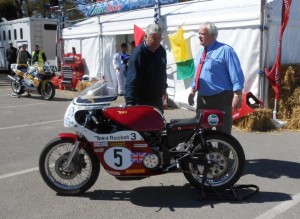 We are pleased to be associated with Rob North Triples, trading, as “Trident MCS” they are a manufacturer based in the West Midlands, owned by Les and Denise Whiston, manufacturing Rob North Trident and Rocket Three Racers. They sell complete machines, frames and many parts, indeed all that you may require for your triples.