For all of you who have never visited Cadwell Park before (like myself and John) next time there is an event there, we strongly suggest that you visit this fantastic circuit.We don’t want this to sound like an estate agent’s write up, but, basically we cannot fault it, the approach is impressive, it is well laid out and extremely well kept. 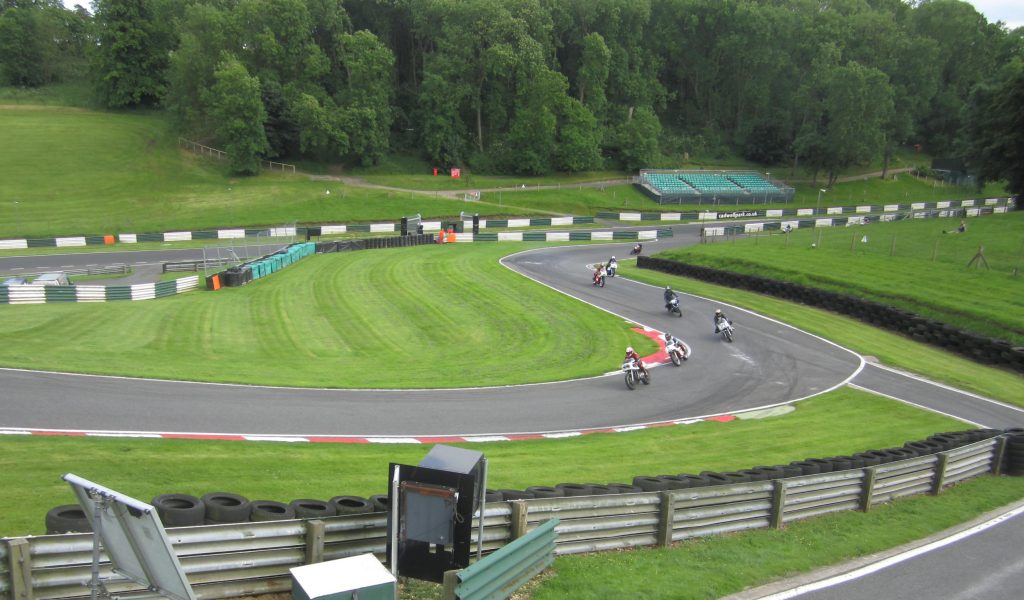 The 2.25-mileracetrack has to be seen, to be believed, it is in excellent condition and it twists and winds through the open park and woodland through some of the most picturesque countryside we have ever seen, akin to that of a country estate. The “park” is well established with mature trees and the whole area is beautifully landscaped with grassed areas being maintained like well-kept lawns, (despite the resident rabbits).

Nicknamed the ‘mini-Nürburgring’, Cadwell Park, in Lincolnshire, celebrated its 80th anniversary in 2014,it is extremely popular with bikers from across the country and having been there now ourselves, we can easily understand why.

We could never disagree with the Circuits claim that “once discovered, it becomes a firm favourite amongst those who visit, be they spectators or participants”. 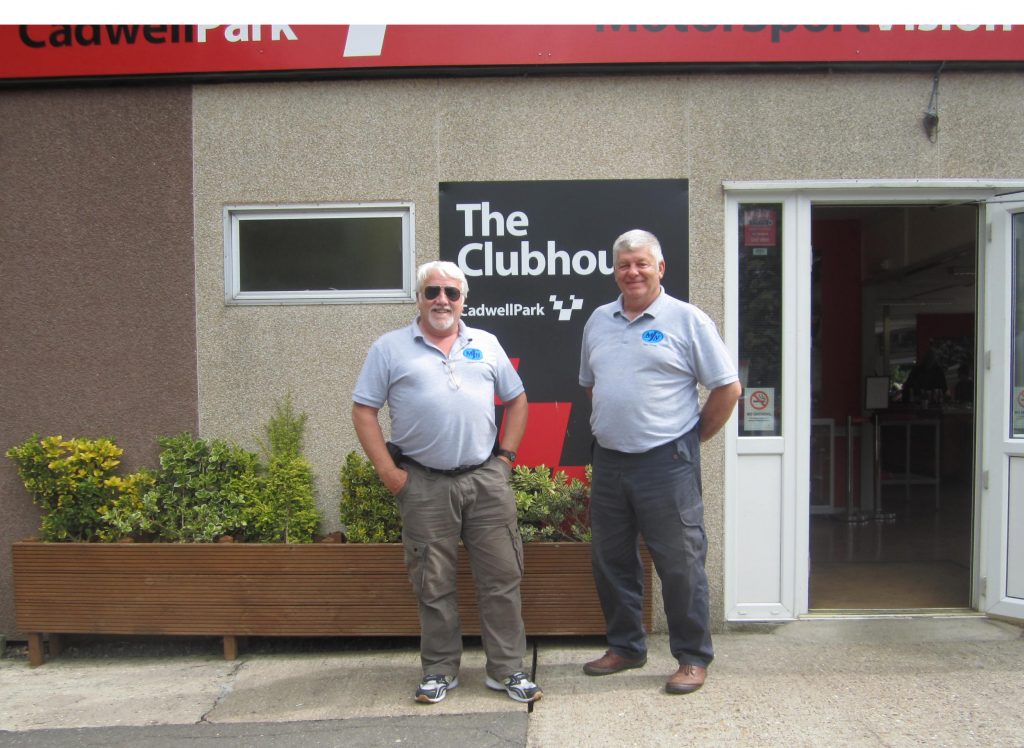 The facilities at Cadwell are very good and although, like most circuits, the toilet capacity can be under rather a strain with extremely high attendances (hence the advice when attending most circuits is to always take your own emergency toilet roll), we were pleasantly surprised that the “toilet roll emergency pack” was never required, as despite there being a bit of a “log jam” on the Sunday morning the toilets were actually very well serviced by the circuit staff and very soon back in commission.

The facilities were scrupulously clean with hot water on tap in the toilet block(most of the time), and there are separate showers with copious amounts of hot water. There is a modern Club House on site serving good quality food and it also has its own bar and seating area, with track side viewing beyond.

There is plenty of access around the track to allow viewing from virtually anywhere, as well as grandstand styled seated viewing in several locations, all in all quite a pleasant surprise to us and indeed most impressive. 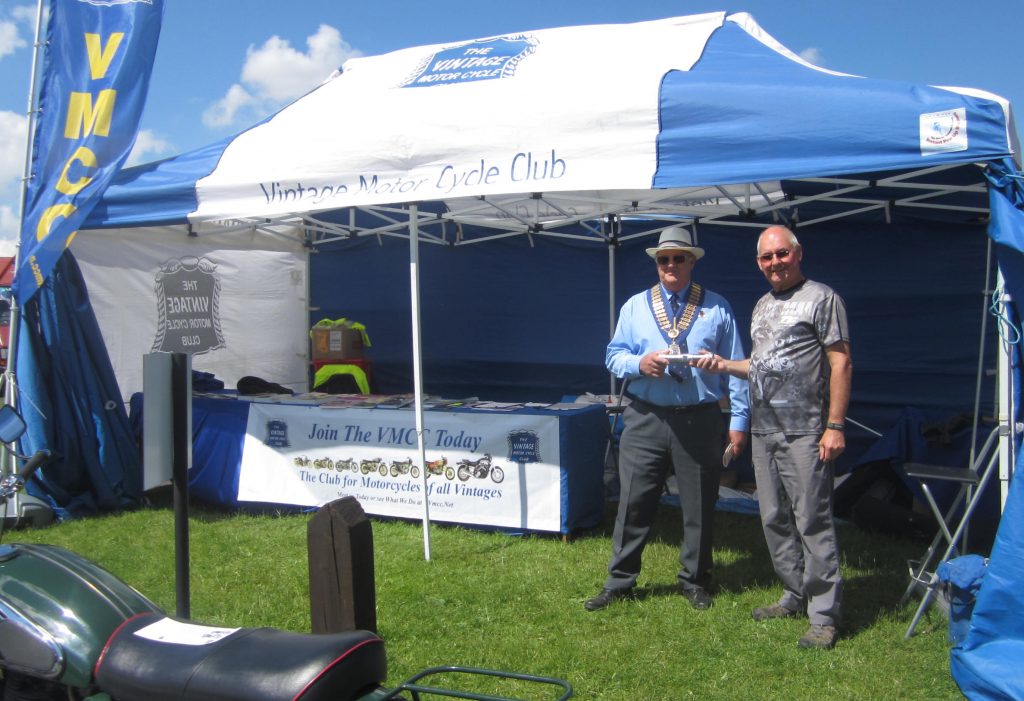 I had the opportunity to put a face to a voice, when I met Jon Rush the Circuit Manager at Cadwell for MSV (MotorSport Vision) and we discussed this being our first visit to Cadwell and the good impressions that it left on John and I. This also afforded us the opportunity to invite the Cadwell Park Race Circuit to join our “Friends of John’s Motorcycle News”, which Jon was pleased to accept, so we are very pleased to welcome them on board.

The main reason for our visit to Cadwell was to support BHR and the VMCC in celebrating their 50th and 70th anniversaries.The VMCC’s well-travelled baton (details of which can be found within our article “VMCC 70th Year Anniversary” within our VMCC section)ended its epic journey at Cadwell and was then handed back to its creator (and current VMCC President), Rod Hann. 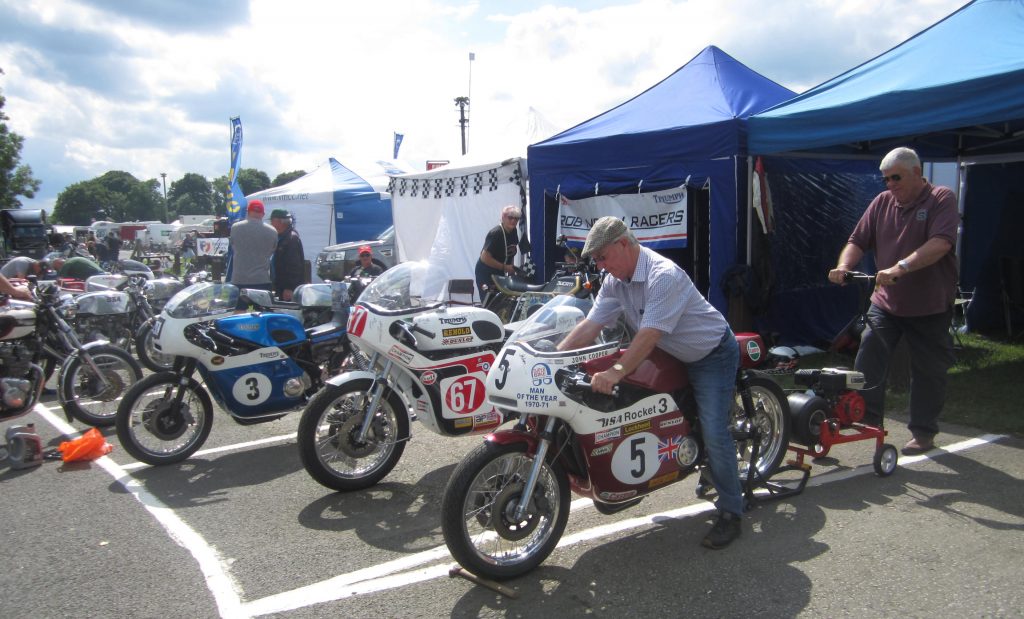 We have to say at this stage, from a personal point of view, that we were rather disappointed at the lack of support from the VMCC’s sections, considering that this was a special70thanniversary celebration. Come on Sections, after all it’s your Club and it needs your support!However, top marks must be given to the East Devon Section, especially to Mike, Rob and Cath for riding so very far to lend their support to this event.

As usual our good friend Joe Johnson managed to conjure up a wonderful display of Triumph & BSA Triples on the Rob North Racers display, including John Abram’s own “Slippery Sam” and his “John Cooper” triple, the latter of which Lloyd Dickinson took to the track on, only to have to retire on the second lap because it started firing on two cylinders. Subsequent investigations indicated that the fault might have been caused by bad HT contact through a slightly bent spark plug top thread, much to John’s disappointment! 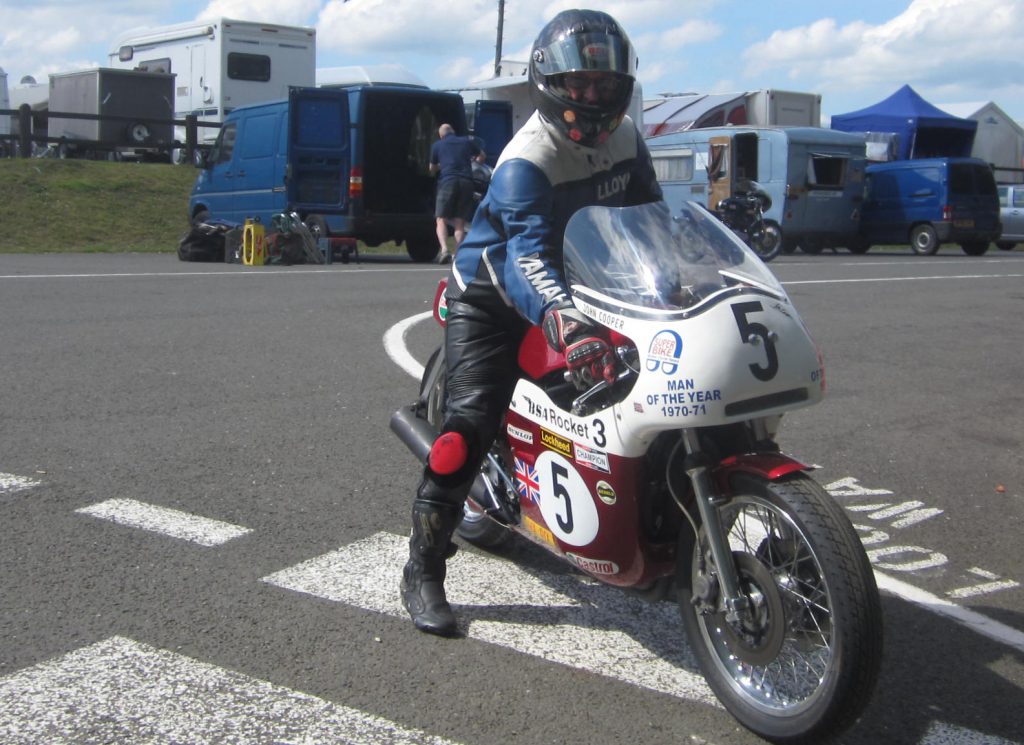 As well as the fine selection of triples on display we also had some really unique Triumph and BSA specials that attracted much attention and in many cases, a second look to make sure you weren’t actually seeing things!These tremendous machines and unique motorcycles are from the stables of a very skilled and unassuming engineer called George Pooley.

Details of these unique motorcycles can be found in a separate and truly fascinating article about “George Pooley’s Hand-Built Specials”within our “Techie Stuff” section. 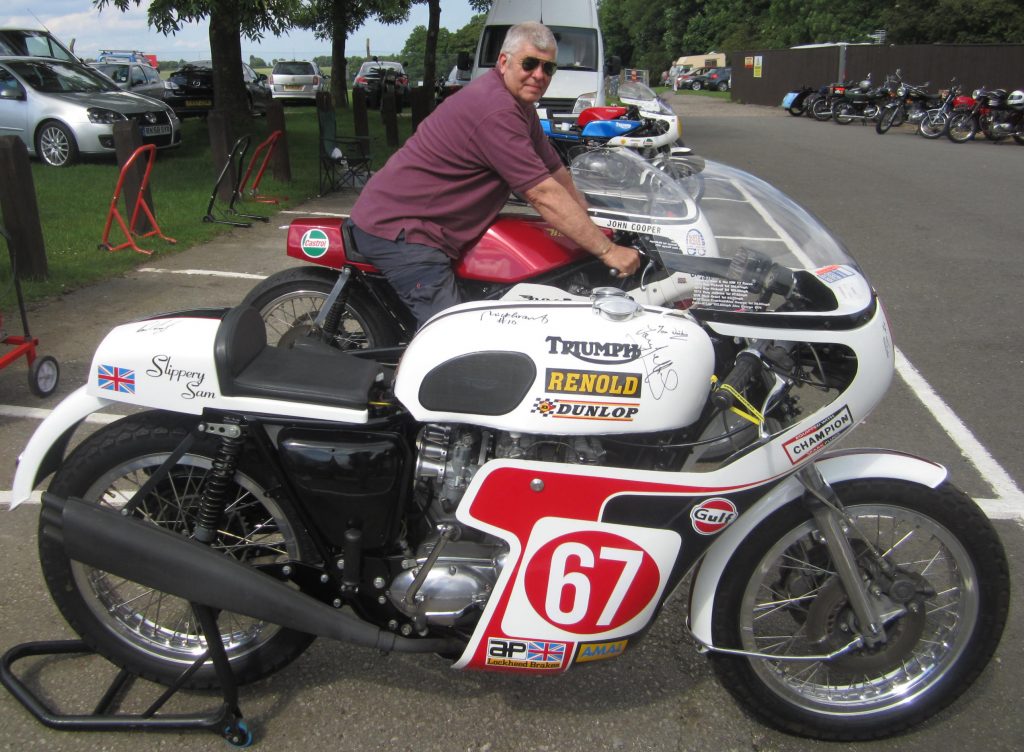 There were Veteran and Vintage machines of all makes and manufacturers four stroke and two stroke motorcycles, B.E.A.R.S sidecars and B3 Cyclecars, Morgan 3 Wheelers, and Scooters, both automatic and geared.The Circuit was extremely busy and the 3-day event was extremely well attended with all available track sessions fully booked.The weather was at best changeable, when the sun was out it was extremely hot, when the black clouds came over it was extremely wet and one clap of thunder shook everything around. 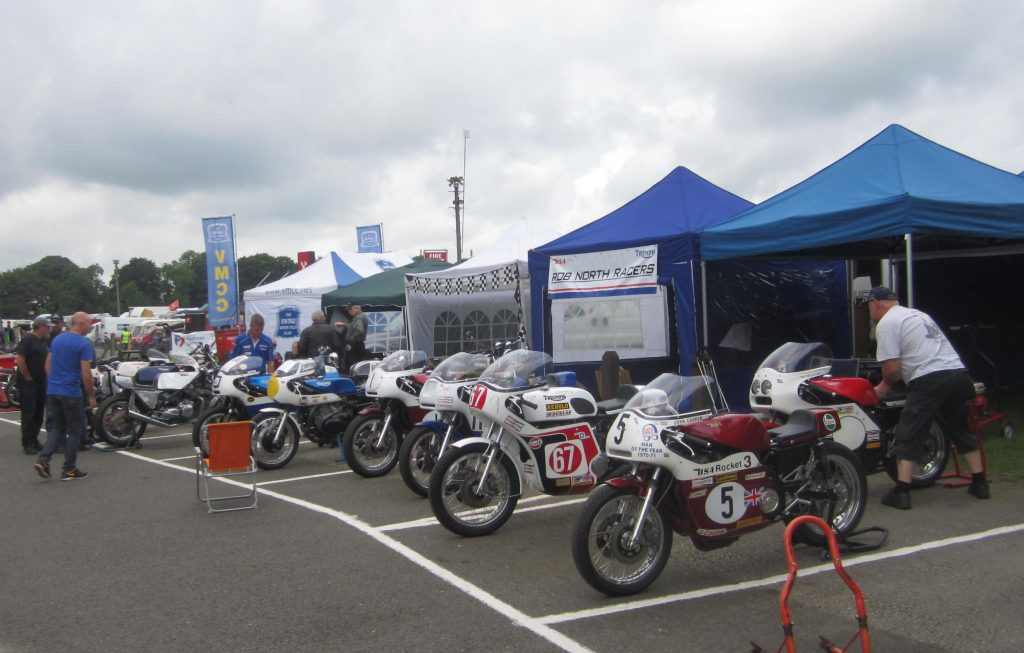 We would really like to thank Gerry Daine of BHR (British Historic Racing) for his organisation, his invitation and everything that made the event a huge success. We would also like to thank both Gerry and BHR and Giles Willison and the VMCC for their sponsorship and their generous donations of prizes towards our Charity Raffle, which will be held at the Mallory Bike Bonanza on 30th July 2016.

Cadwell Park is a really popular destination in the MCE Insurance Superbike calendar; it has an increasing number of Club Car events, along with Vintage and Classic Motorcycle events.

It is obvious to us why it has become a favourite venue for motorcycle fans all year around, but especially in August for the British Superbike Championships, we would highly recommend it. 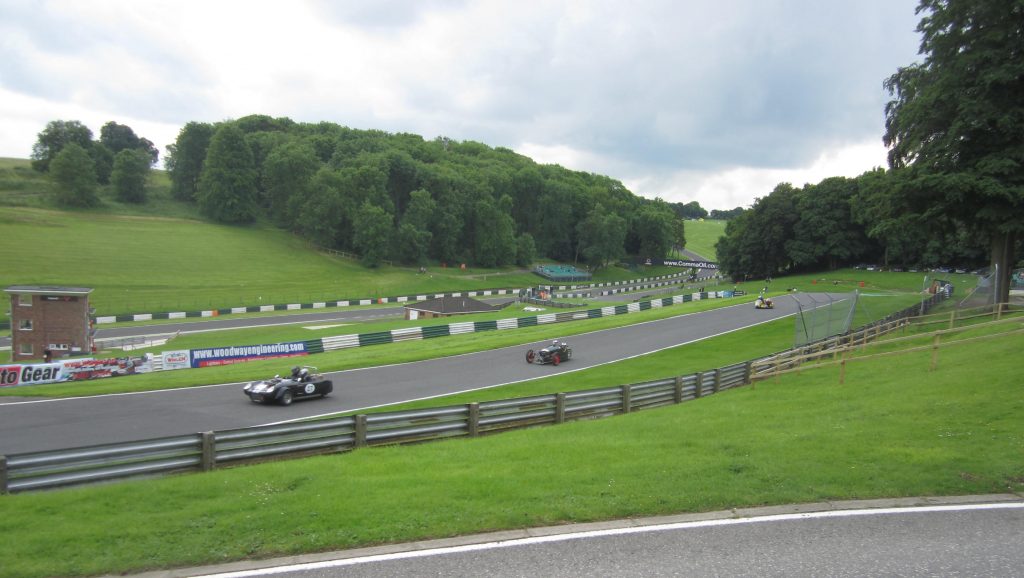 Unfortunately we were unable to stay for presentation of the awards, but no doubt details of entrants and prizes awarded will be published on the BHR website, so for these and any more information about British Historic Racing please check out the BHR website at www.britishhistoricracingclub.co.uk where you will also find a list of appropriate contact email addresses under their “Contact Us” page.