There is one guy whose machines always pull a crowd when Joe Johnson’s Rob North Triples are on display at any show and he is George Pooley, an unassuming Gordie, (seldom seen without a cup of tea in his hand) currently living in the East Midlands. George’s engineering background and his love of Triumph motorcycles has lead him to build some rather unique machines that always attract attention at any show and, hence,they are probably some of the most photographed motorcycles in existence. 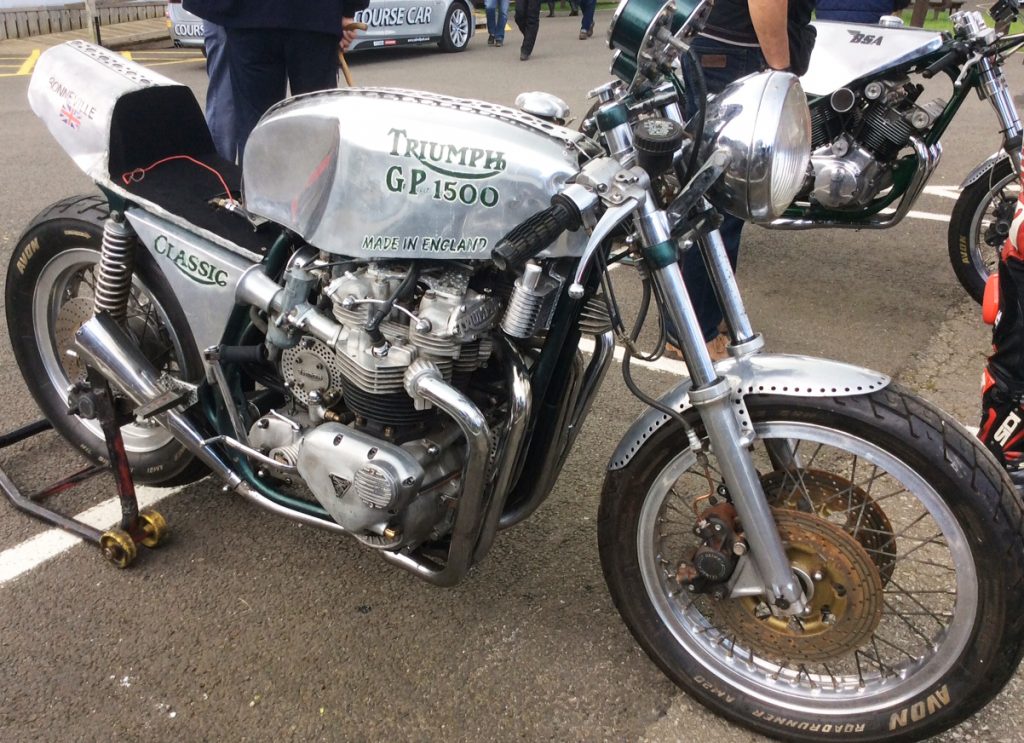 George’s GP1500 was made back in 1990 when he decided to mate two  750cc unit construction Triumph Bonneville engines to a set of 1952 & 1953 pre-unit construction crankcases and crankshafts, grafted into a BSA A10 frame.

The engineering skill involved in attempting to do anything like this is tremendous, when you consider the complications of matching up unit and pre-unit construction parts, to say nothing of the skills required to marry up these engines to a suitable drive chain, and all housed within a BSA A10 frame! 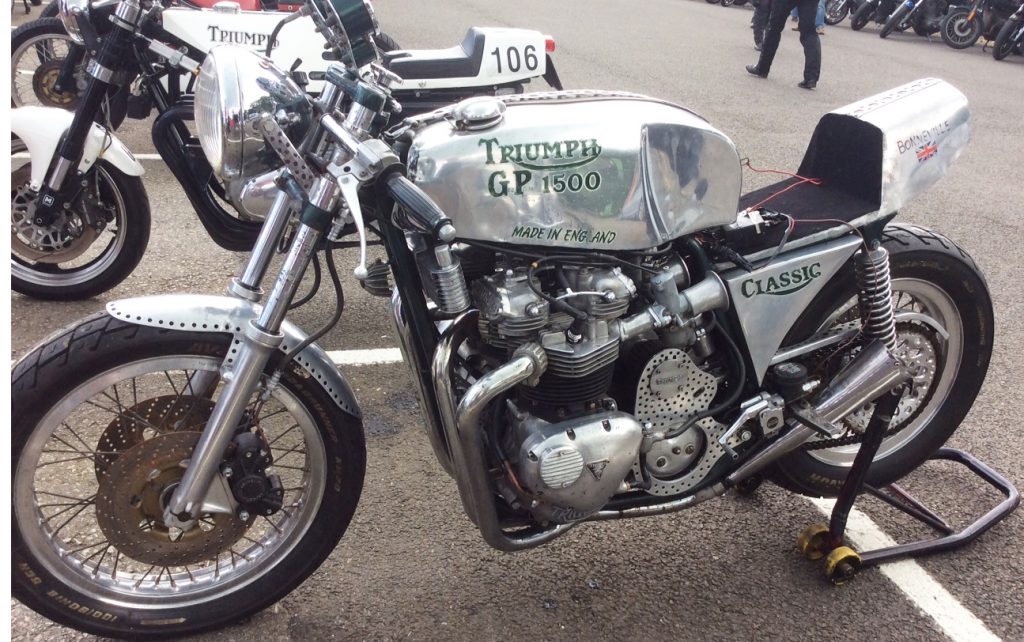 The amount of skill and time taken to do this is immeasurable and to add to this, if you look at the attention to detail you will see some rather unique crankcases and four rocker covers, apparently embossed cast with the “Triumph”  name.

Believe it or not George actually made these himself by roughly aluminium welding each letter on to the cases, and then he painstakingly carved 0ut the Triumph names on not one, but four hand made rocker covers and also on both crankcases. 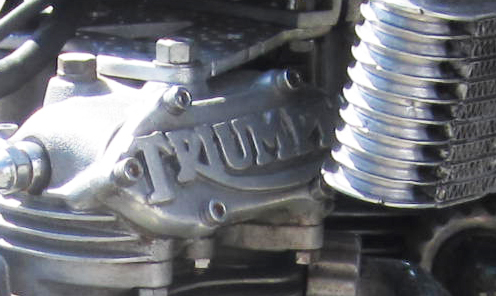 He tells me that this was done using special files and scrapers (without the aid of a Dremel). He employs such dedication for detail that this is one task alone that must have taken him days on end to complete; such is George’s passion for Triumph engines.

Obviously the overall construction was a lot more involved with the manufacture of brackets, engine plates and even the tailor made exhaust pipes. We don’t want to give away all of George’s secrets, so better still just take a look at the photographs and marvel in what he has achieved. 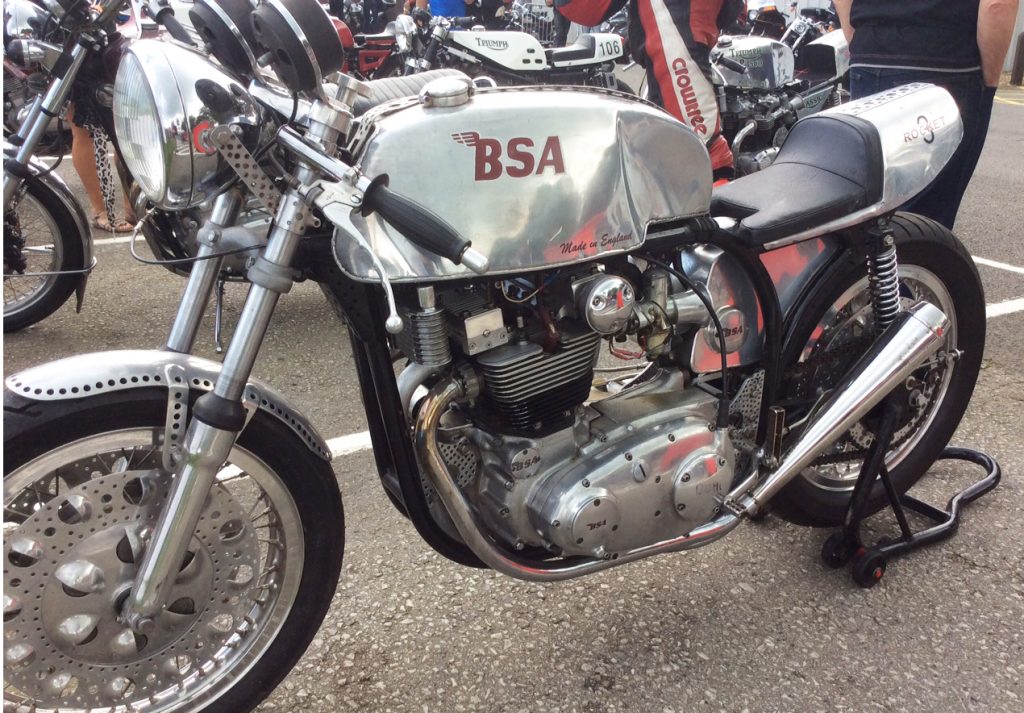 Around 2007 George decided he would like to design a machine with overhead cams and so he set about, in his own words “re-engineering a BSA Rocket 3 engine”  which he then custom fitted into a 1961 Norton Feather bed frame.

As he really loved the style of the BSA A10 timing cover he simply  cut off the timing side to accommodate one!

Sounds easy when you say it like that, doesn’t it? 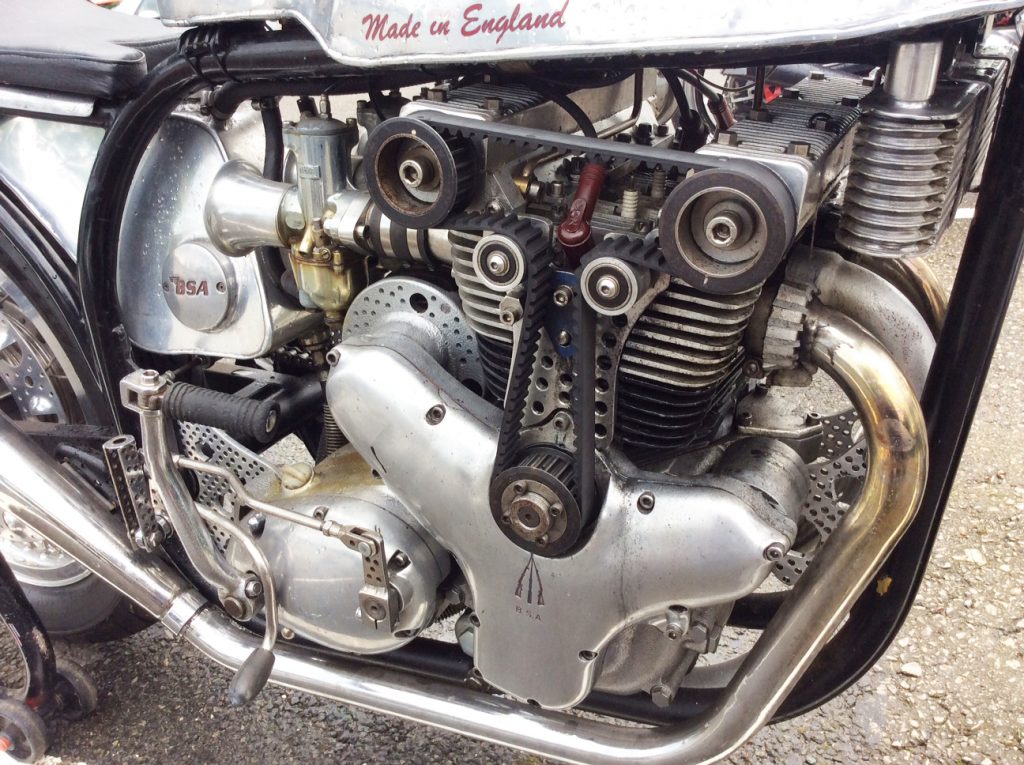 He made the oil tank, the seat and the fuel tank, his uniquely designed cam boxes were hewn out of billet aluminium and he had the camshafts made to his own specification.

There is no doubt that this machine with its unusual external cam belts and BSA A10 timing cover always attract attention and sometimes almost disbelief from passers by who cannot fail to be intrigued by this unusual and amazing configuration. 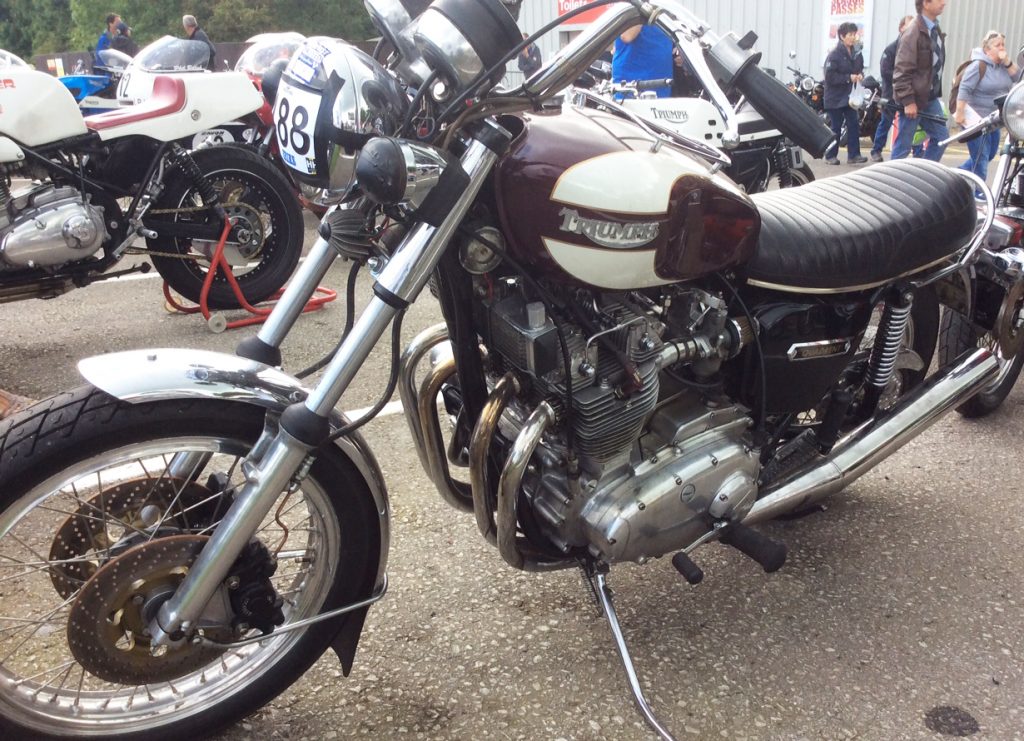 Back in 1973 Triumph engineer, Doug Hele designed and built a “bitsa”  a 1,000cc four-cylinder Triumph motorcycle made up from Trident parts. It was reputed to be rather lopsided due to the fact that the fourth cylinder protruded out from the right hand side of the bike, because the primary chain case and final drive sprocket could not be relocated and so it was never really likely to reach production and/or compete with the influx of streamlined Japanese four-cylinder machines at that time.

It is believed that this one and only prototype built by Doug Helenow resides within the National Motorcycle Museum in Solihull, Birmingham.

Fascinated with this concept and never wanting to be outdone, George decided to build his own Quadrent using a T 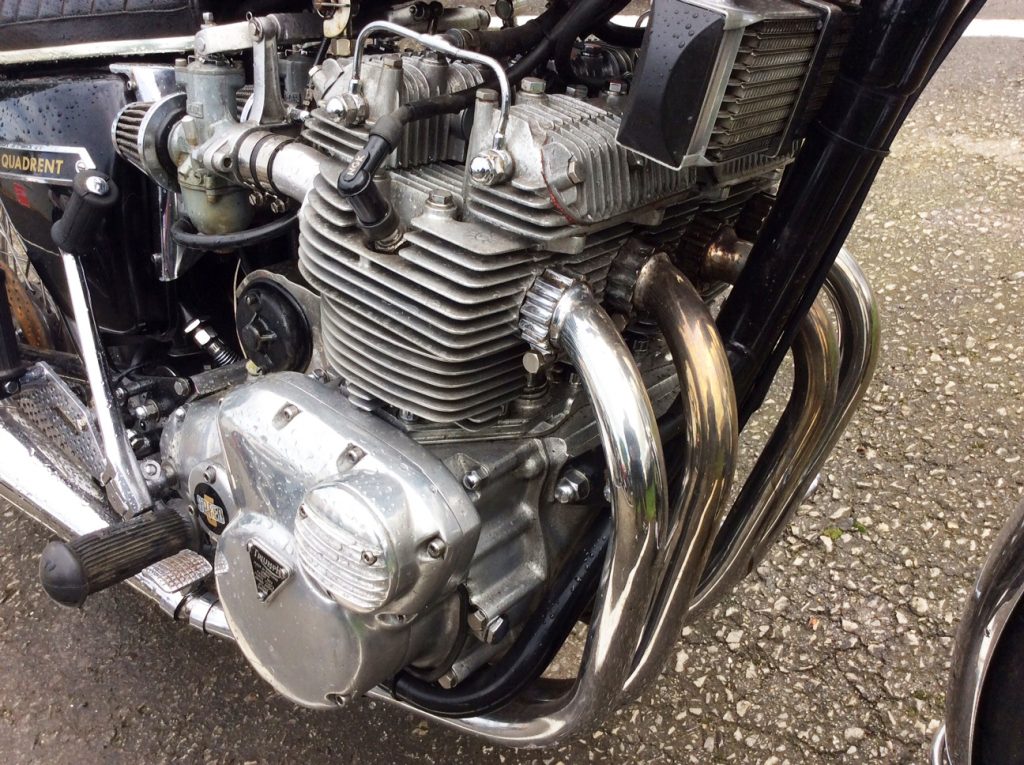 riumph T160 frame and two sets of T160 crankcases and barrels, which he cut and modified. As part of this major engineering feat he actually made his own crankshaft out of solid steel billet, made the carb inlets and made a cradle to comfortably sit the new four-cylinder power plant within the T160 frame.

Other than this George modestly says that the bike runs on standard pistons and a standard T160 rolling chassis!

He forgot to mention that Classic Motorcycles wrote a much more in depth article on this marvel of engineering back in early 2009. If you would like to read more about this bike from Andrew Westlake’s article titled “A homebuilt version of Triumph’s forgotten prototype”,  then please visit www.motorcycleclassics.com/classic-british-motorcycles/triumph-quadrant.aspx 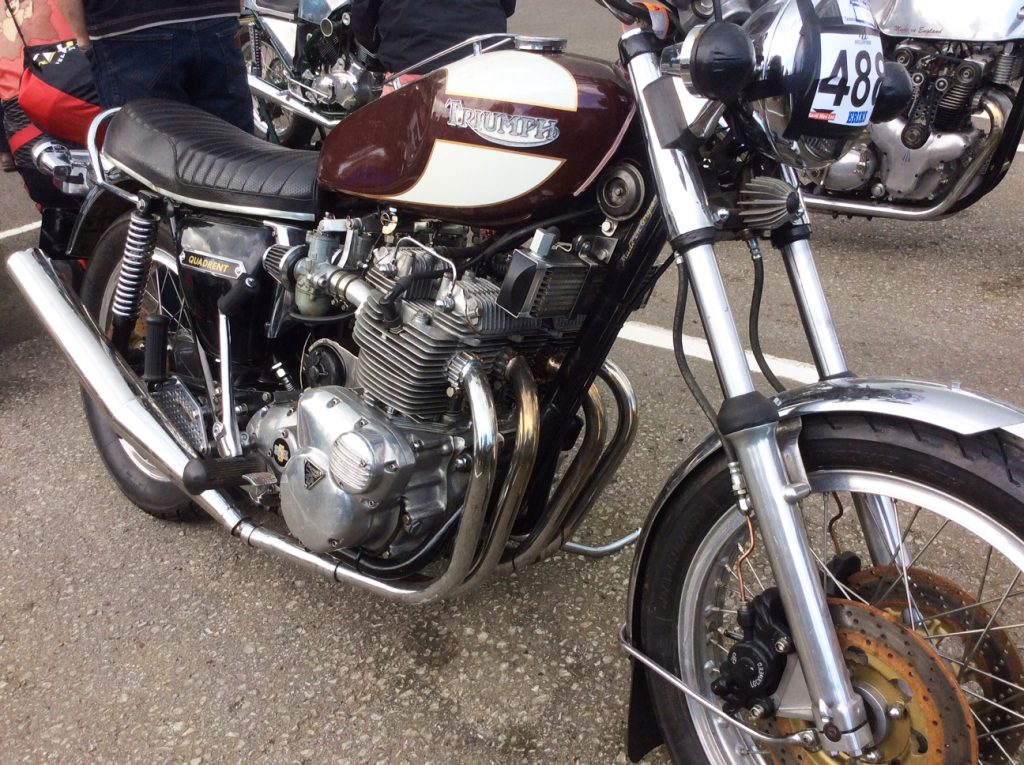 Now for those of you sharp eyed people who are dying to tell us that I (& George) have misspelt the word “Quadrent”, by using an “e”  instead of an “a”,  both on the bikes side panels and within this article! George would like to point out that the original prototype “Quadrent” was purposely spelt that way in order to match the name “Trident”  from the donor machines from which the Quadrent was made!

This finished machine looks and sits so comfortably within the other Triumphs and Triples, that one could be forgiven for walking past it and not realising just how unique this home-built four-cylinder “Quadrent”  machine actually is.

Now if you thought that all that was pretty impressive, how about George’s fuel injected Overhead Cam BSA V6? Just take a good look at this engineered piece of art, that literally stops people in their tracks. 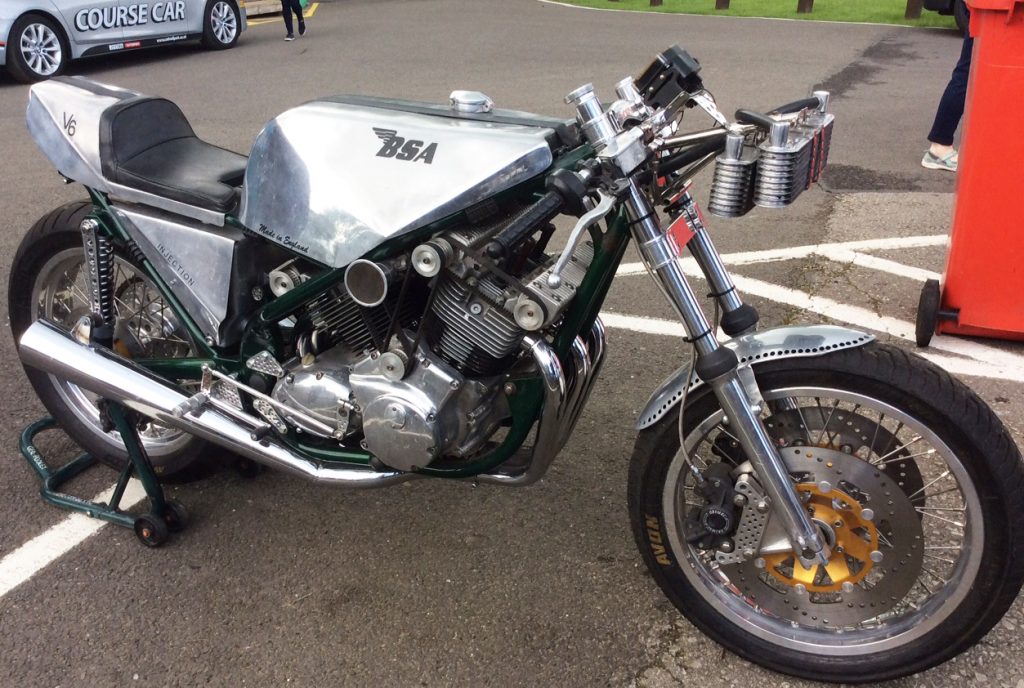 After his experiences creating overhead cam boxes for his Rocket 3 machine George decided to take things one stage further!

This fantastic creation has been born out of the cleverly spliced together parts of two 1963 Rocket 3, A75 triple engines. George has designed, calculated and skillfully cut and welded the aluminium crankcases of these two triple engines to create a superbly crafted B.S.A engine in a V6 configuration.

Like that of his OHC Rocket 3, George made his own cam boxes, he also manufactured the petrol tank, oil tank, seat and engine plates and in his own modest words he has “reworked”  the crankshaft!

This tremendous power plant has been skillfully mated into a Rob North frame, all of which was re-jigged at Trident Motorcycles (see our article on Rob North Triples  within our Motorcycle Clubs section).

George gives credit to the help he received to re-jig the frame, from both of his motorcycle colleagues, Mick Pearce and Les Whiston of Trident MCS.

This work of art is George’s“work in progress”,  but where else are you likely to come across a 1500cc B.S.A Overhead Cam, Fuel Injected V6 ? 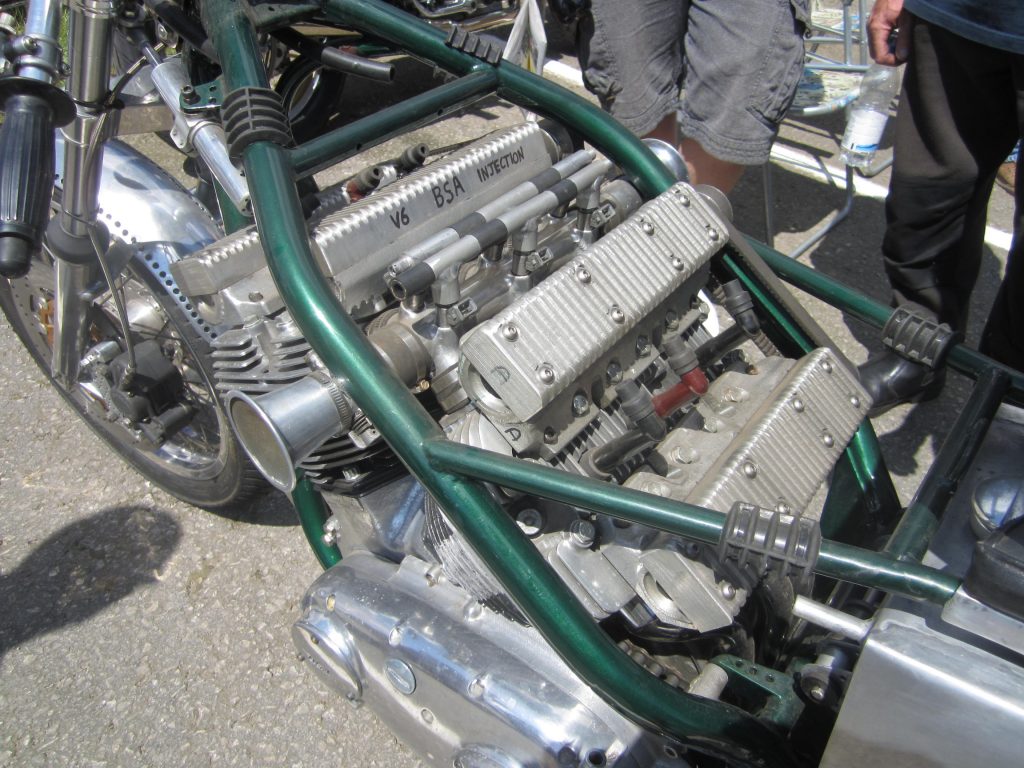 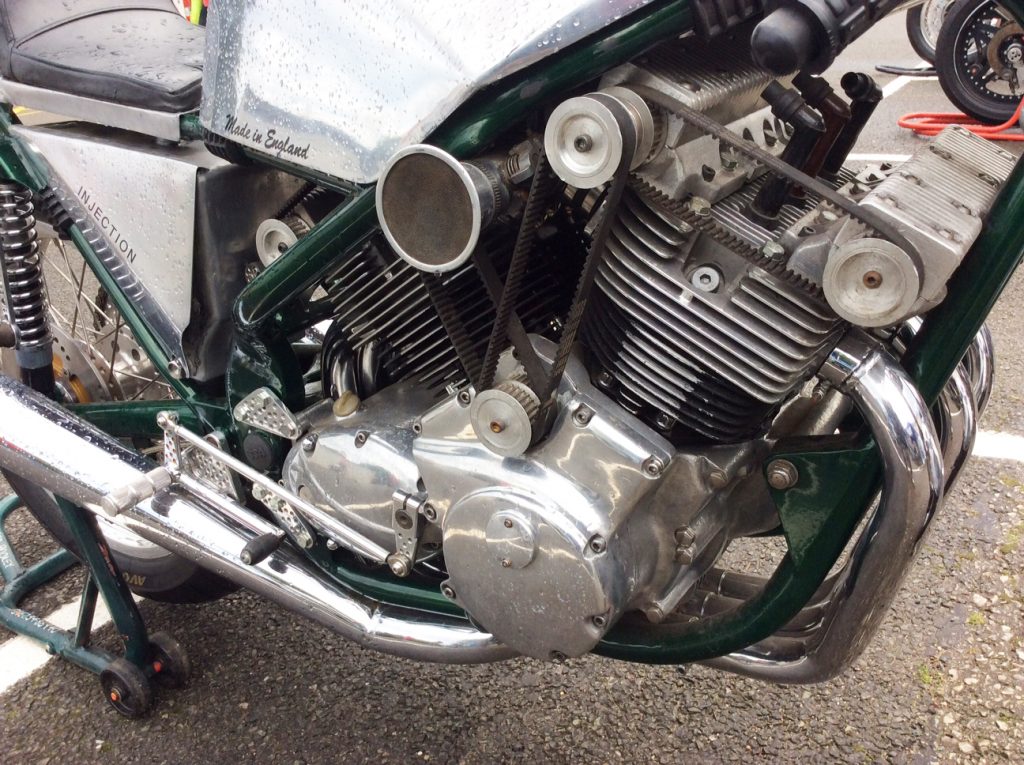 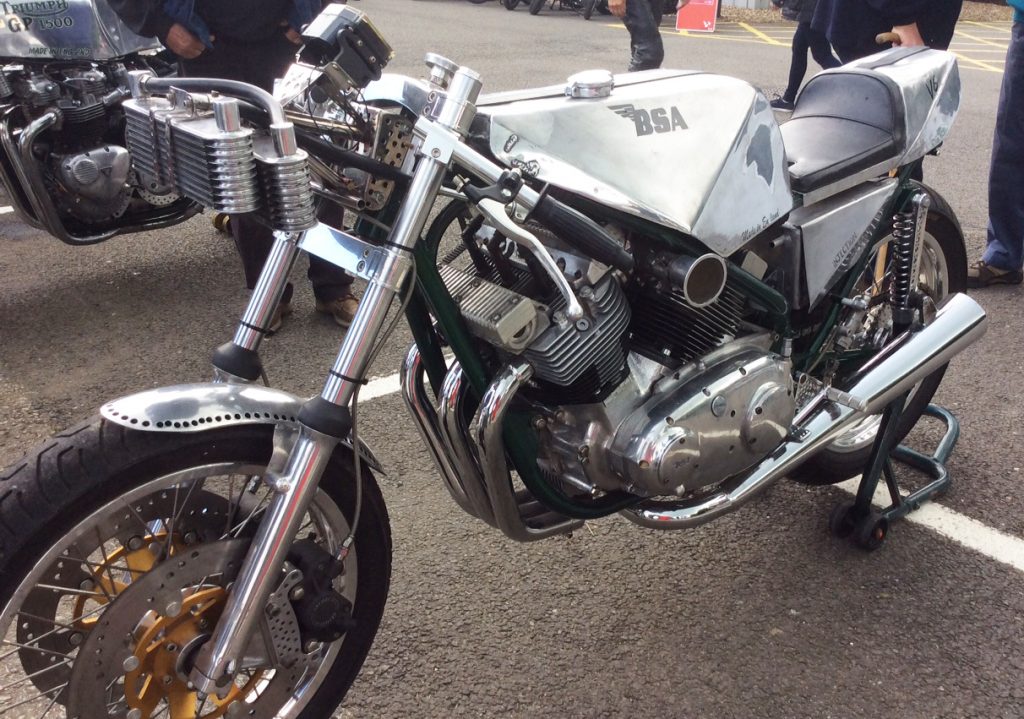 Such engineering skills are really hard to find nowadays and we trust that you will enjoy what you have seen and read and maybe take the time to see George Pooley’s incredible machines, in the flesh, whilst they are on display at Circuits and shows around the country. I feel honoured that George has taken the time to sit down and share with us some of the construction details of these tremendous motorcycles.