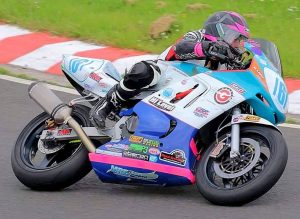 For the 2022 racing season, 2 Strokes Racing are happy to announce that www.segmentationgroup.com are coming on board as the teams primary sponsor. Following on a successful season riding the team’s Honda CBR600, and her own Kawasaki 300cc Ninja, Kate Walker #61 is looking forward to “Lights out, race start”

Kate successfully raced both bikes in 2021, with a 3rd place championship position in the Bemsee AutoCycle Union Kawasaki Ninja 300 senior championship, and several trophy finishes within the PDMCC – Preston & District Motorcycle Club Steel frame Class. At the final race of the year, Kate put the bike on pole position in tricky, wet conditions !

Joel Haire Racing will be supported by the team, and the tie up with www.segmentationgroup.com , with him making the move to racing his 10TenR 90cc semi auto in some of the English rounds of the Rich Energy British Mini Bikes Championship, following on from his 6th place finish in the Irish Minibike Championship (despite only competing in 3 out of 5 rounds….). Joel hopes to move up a step or 2 following on from his previous results, finishing 3rd or above IN EVERY RACE HE COMPLETED ! Joel will race between Northern Ireland, and England, both on Tarmac, and in the mud……

Pairing up with the Segmentation group will mean that Kate will have fresh tyres, supplied by HMT Racing and Road, for every day she races in 2022, in the Club Thundersport GB Golden Era Supersport/Steelsport – Blackbird Corporate sponsored class . Racing with Thundersport GB will mean that WE WILL be coming to a race circuit near you !

Nick Cassidy, Chief Executive for The Segmentation Group said ” We look forward to working with the team, and hopefully see the 2 riders do well and succeed in their chosen championships !”

Kate Walker commented ” Having fresh tyres every time we roll out onto track will give me the confidence to push hard from the start, and help secure positive results throughout the year !”

The team will have a launch event at the Rich Energy British Mini Bikes Championship winter series event at Three Sisters Circuit on the 9th of January; please get in touch if you would like to join us. Joel will make his debut racing in England, and we may even have a special guest !

If you would like to follow The Segmentation Groups Lead in assisting 2 riders make their dreams come true of being a top class motorcycle racer, please get in touch !

Friend and supporter of the team, John Abram of www.johnsmotorcyclenews.co.uk  was over the moon at assisting Pete and the team get onto BBC Radio Lancashire, with Garry Scott, where Nick initially heard about the race team’s plans for 2022.