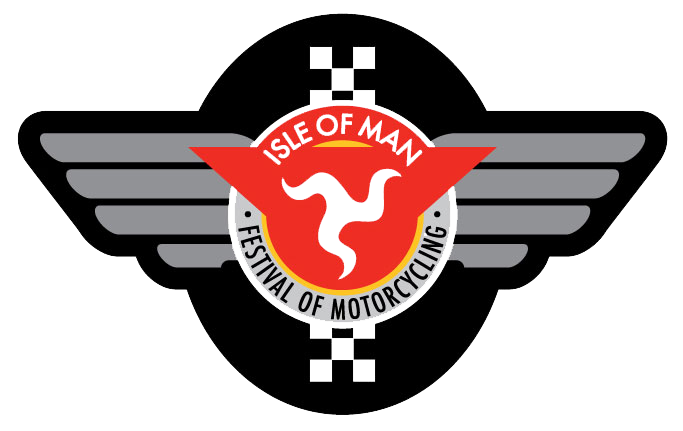 Better known by most bikers as just “The Manx”, the Isle of Man’s Festival of Motorcycling incorporates both the introduced Classic TT and the Manx Grand Prix and is held towards the end of August.

We have been traveling over for the Manx for many years now and 2016 was no exception. The signs were good, mild weather was forecast and we were off to a good start with the sea like a millpond and one of the smoothest crossings that we had ever had over the Irish Sea on board the Steam Packet’s “Manannan”, sailing from Liverpool to Douglas. 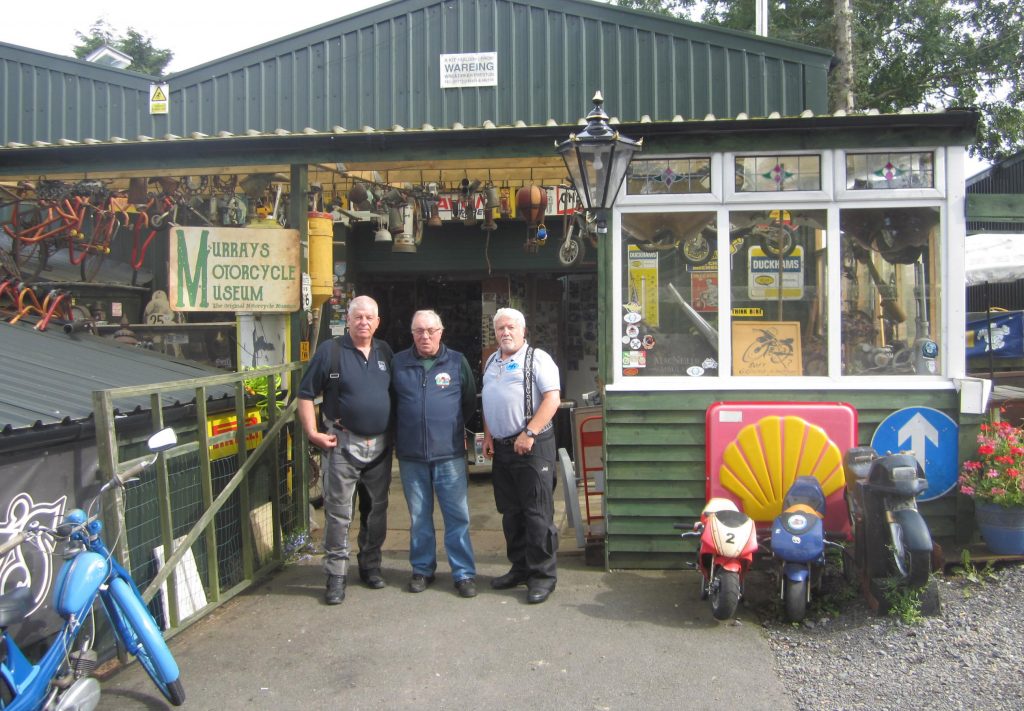 As usual we stayed in Douglas with our good friends Trudi and John and it was like home from home. On our first day we rode down to the southern end of the island stopping on the way to see Peter at the Murray Motorcycle museum at Stanton (see our separate article in “Places to Visit”). We ended up sitting at the front at Port Erin, eating fish and chips, gazing out to sea, at what we told were the Mountains of Mourne, in Ireland, rising up out of a flat and very calm sea.

This is a granite mountain range in County Down in the south-east of Northern Ireland. It includes the highest mountains in Northern Ireland and the province of Ulster, however we have never seen them before from Port Erin and were told by a local that it is a sight that is not very often seen. This may be borne out by the fact that the information board displaying the pictorial outlook and identification of the surroundings of Port Erin bay shows a clear sea in front of you, with nothing at all on the horizon! 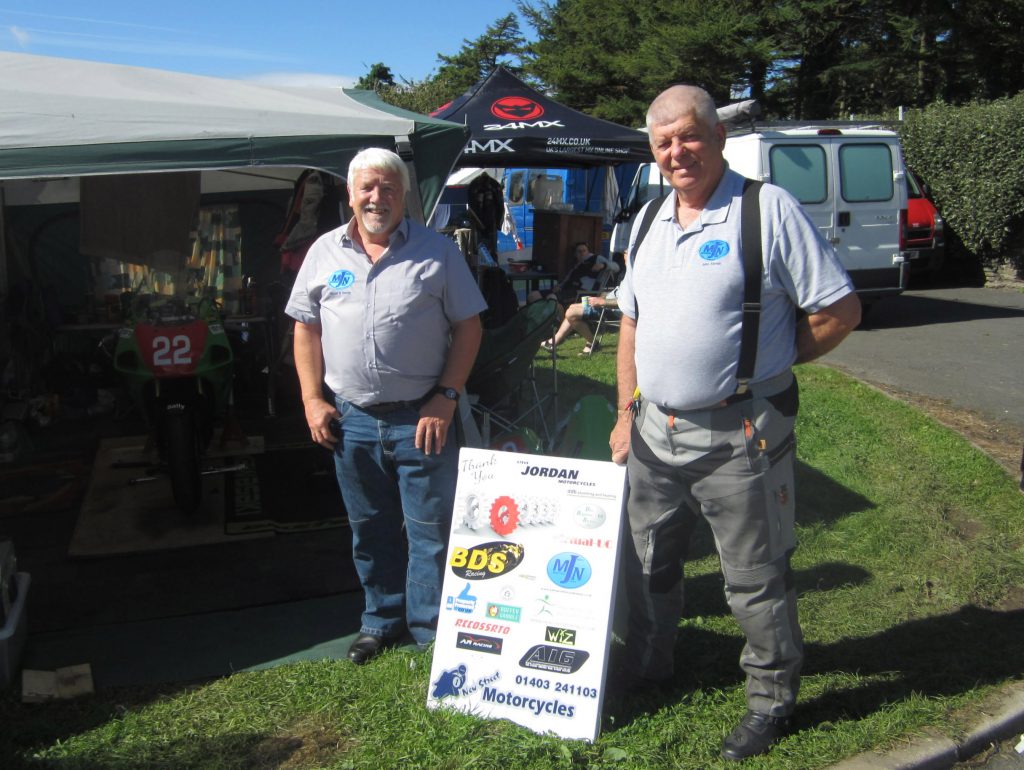 A busy day in the paddock the next day, meeting up with many old friends and visiting Dan’s crew at Dan Beighton Racing (who we sponsored).

Dan had successfully exceeded the 100mph lap during practice, but was extremely busy seeking to replace a faulty rear shock in order to exceed 101.7mph to qualify for the Manx Senior race the following Friday. So, we left them to it and rode off to Peel to bask in beautiful sunshine, visit the Leece Museum (see our separate article in “Places to Visit”) and watch the races from Union Mills that evening. 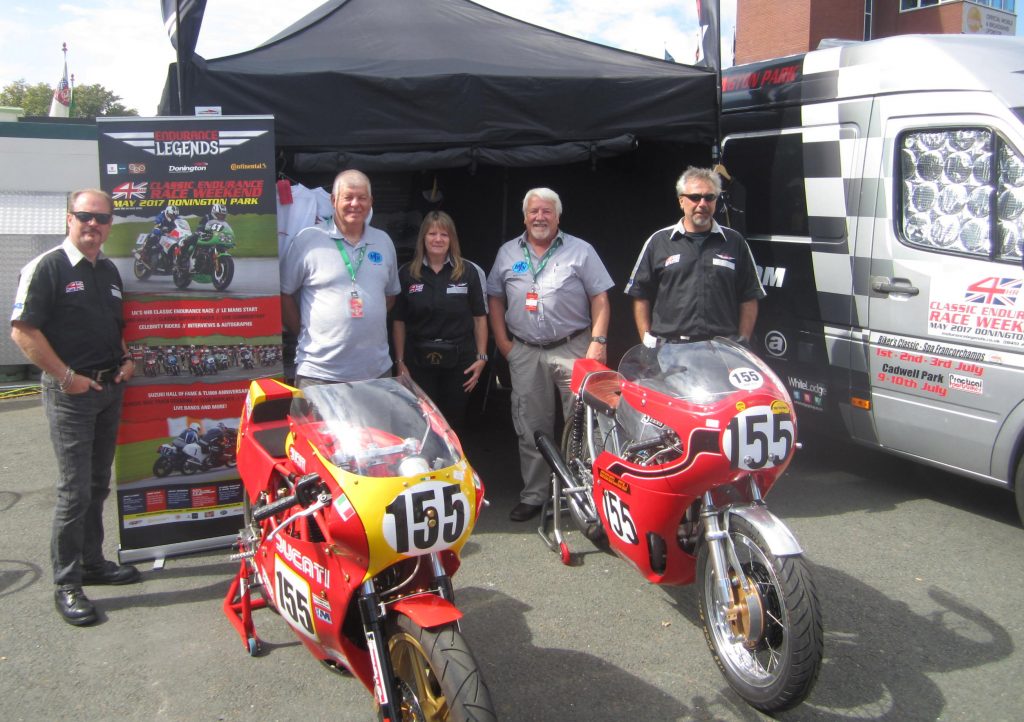 There is more to read about Dan within our separate article about Dan Beighton Racing (in “News and Interest”).

The next day we met again met up with Darin, Karen and Rob at the Endurance Legends display in the paddock to discuss ways in which we could promote and support their planned event at Donington in early May 2017 (actual date to be advised). Latest news – Date now confirmed as 6-7th May 2017

This will be a fantastic weekend event organised by Endurance Legends and our friends at CRMC (Classic Racing Motorcycle Club). Our friends from ERIK’s will also be holding their 2017 Corporate Event there, as opposed to being at Mallory.

Look out for more about this great weekend from us between now and then, and/or checkout the following websites www.endurancelegends.co.uk  ,www.donington-park.co.ukand www.crmc.co.uk 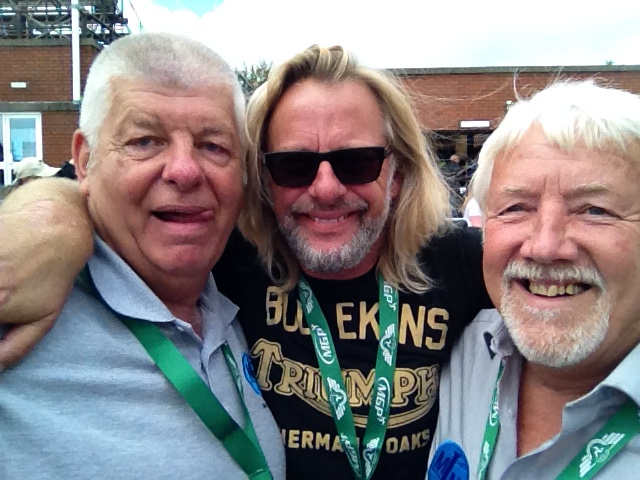 We spent some time with another good friend of ours, Graham, a.k.a George Formby with his Shuttleworth Snap (see our article in “News and Interest”). Graham was there as usual, having fun, entertaining everybody and signing autographs.

Later on we again met up with Henry Cole who was over with his family for a couple of days, busy filming for his TV series as usual,and he was, no doubt, delighted to be able to ride one of Dick Shepherd’s pristine Triumphs.

We also had the opportunity to chat to Mick Grant and thank him for the time that he had spent with Dan and us when we were all at Mallory. He is a great bloke and was genuinely pleased to be able to help Dan and promised to look out for him during race week. 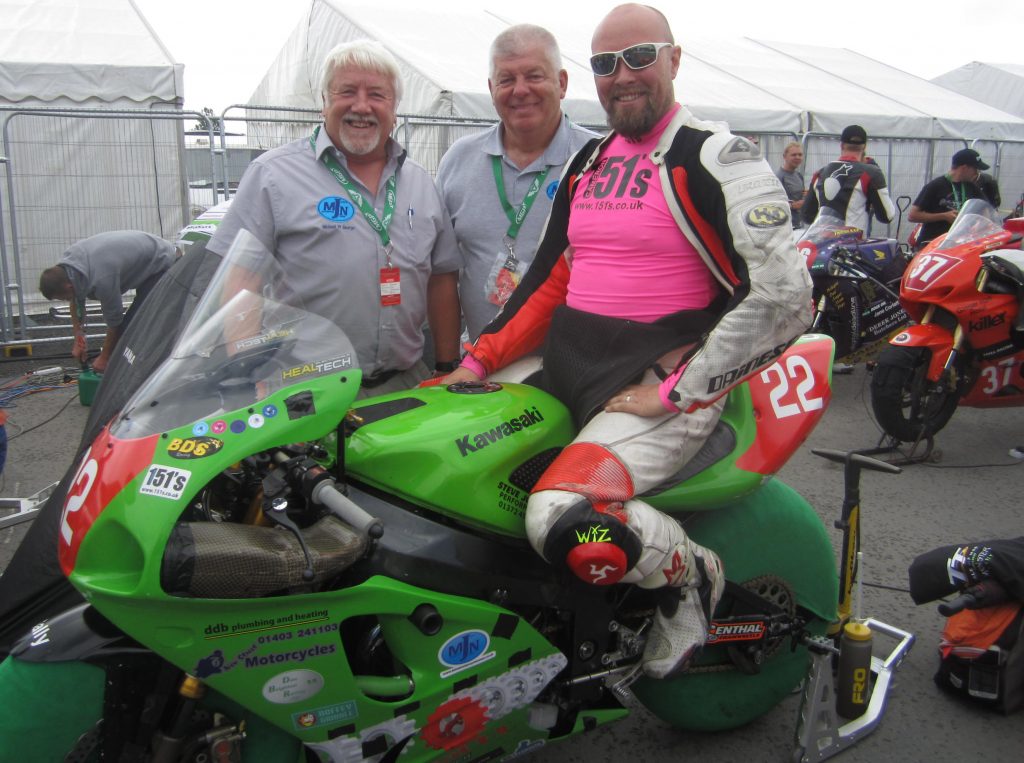 Dan got his shock sorted and went on to have two 104+mph laps, which included a recording of 153mph on the Sulby straight, which delighted us all. Celebrations back at the Dan Beighton Racing camp ensued with all the crew (not forgetting Dave and Spud), with a hospitality lunch and drinks kindly prepared by Janine (non alcoholic of course, as Dan was out again for more practice laps again that evening).

Torrential rain came down later on the Saturday evening, but cleared for Sunday and the VMCC’s Festival of Jurby. We got news that Dan had come off during his second lap of the Saturday evening practice on the mountain road and had been airlifted to Nobles hospital, but thankfully his injuries weren’t too severe (or he would have been flown to the mainland), but after doing so well, it was really sad for everyone to see the end of his dream (well for this year at least).

On Sunday the airfield at Jurby was absolutely heaving with more bikes and people than we have seen for several years. The Battle of Britain fly past at 13.00 hours was missing the Lancaster Bomber (believed to be due to engine problems), although strangely enough a BBC local TV news text transmitted after the event claimed that it had flown over! Anyway, everyone enjoyed the Spitfire and Hurricane’s manoeuvres above the airfield and there were plenty of bikes going out around the track all day. 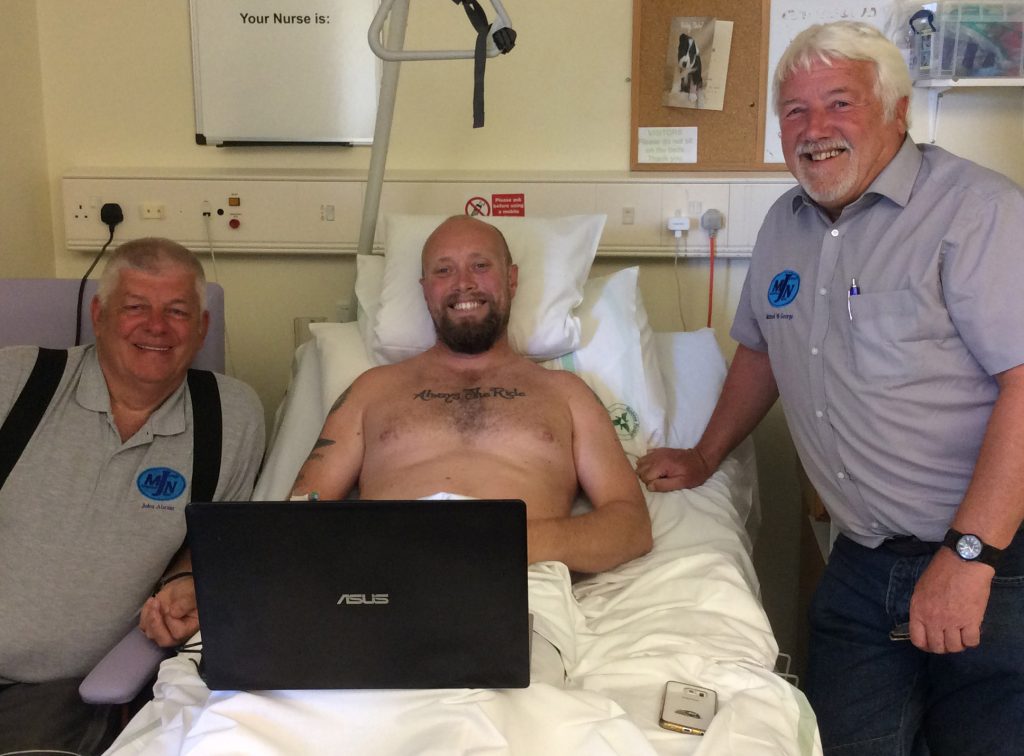 Andy and I went over to the Isle of Man Motor Museum where I met Denis Cunningham and took a brief look around. We later traveled north and bumped into our German friends, Suzie and Eckhart once again at Point of Ayr on another sunny afternoon that made the purple heather and yellow broom look more attractive than ever against a deep blue sea. Later on we traveled around the coast to Laxey to meet John. The Island’s road engineers were still working on rebuilding the bridge that was washed away in previous storms.

Monday was race day, but we headed off to Nobles Hospital to spend a couple of hours visiting Dan Beighton and Tony East of the VMCC. Considering his cracked vertebra Dan was on good form and we recorded an interview for BBC Radio Lancs then he showed us some video of him on the course, and of when he came off it!  We are all so glad that his injuries were not any worse and wish him well for a speedy recovery.

Tony had been in Nobles for quite some time recovering from a road traffic accident some time beforehand, as a result of which he had unfortunately received serious injuries to his legs and a recently replaced hip. He was nevertheless very chatty, in really good spirits and very pleased with the feedback that he had received about the number of visitors at the VMCC’s Festival of Jurby.

Tony was telling me that one of his friends and colleagues, Chris Proctor, had recently come off at the Bonneville Salt Flats at around 175mph, but was, thankfully, on the road to recoveryand still helping out, such is his strength of spirit. Although we never got a chance to speak to him, we believe that we actually saw Chris manning the start line at Jurby (despite being in a wheelchair with his leg in plaster), as Maria Costello was about to go out on the track.

Darren Cunningham (who was also at Bonneville) later confirmed to us that the remains of Chris’s bike would be brought back from the States to go on display at the Cunningham’s, Isle of Man Motor Museum (IOMMM), more can be read about the Bonneville Speed Week on the museums Facebook page www.facebook.com/isleofmanmuseum. 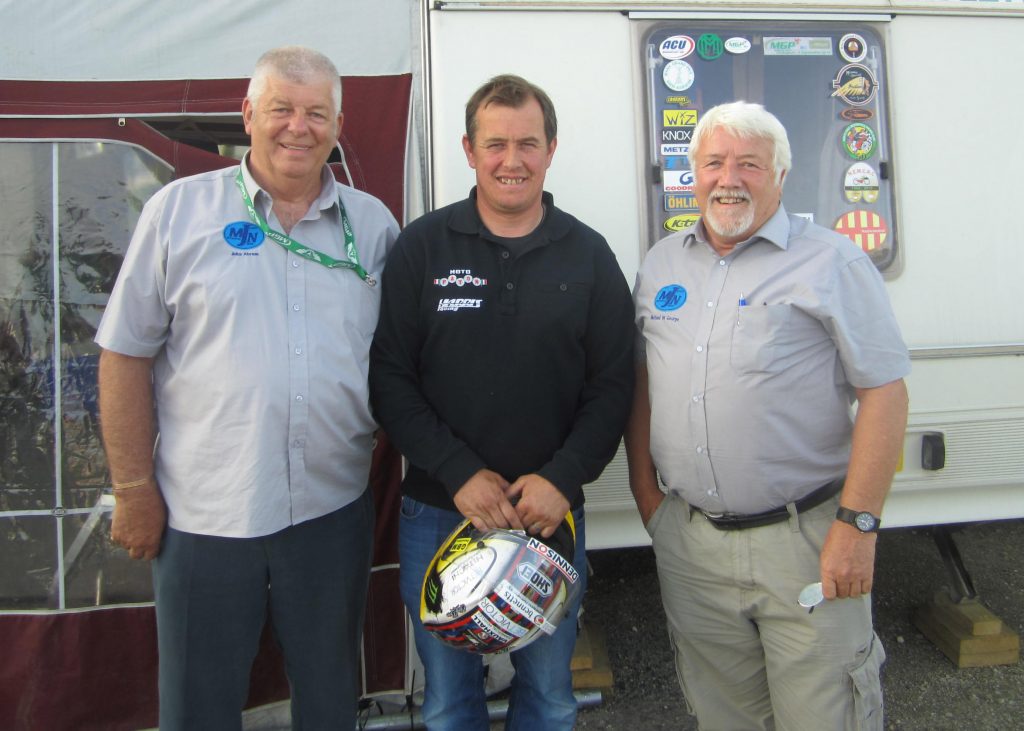 A day or so later John and I welcomed the opportunity to re-visit the museum; Denis and Darren were really great and showed us around their tremendous displays, including their restoration workshop (which is not open to the public). We were also afforded the opportunity to record a Facebook live interview with Darren, which should be available on John Abram’s Facebook page.You can read our updated comments on the IOMMM (which is a truly fantastic place to visit) within our separate, recently updated, article within our “Places to Visit” section.

On Tuesday the Norton and Triumph owners Clubs meeting were well attended, as usual, at Laxey and Gansey respectively (although things were not yet quite back to normal at Laxey).

Construction was well under way on the new bridge and a new temporary footbridge had been erected to enable the river to be crossed by foot. Despite some extremely high winds across the Island, the weather held out once again with sunny intervals and, more importantly, no rain! 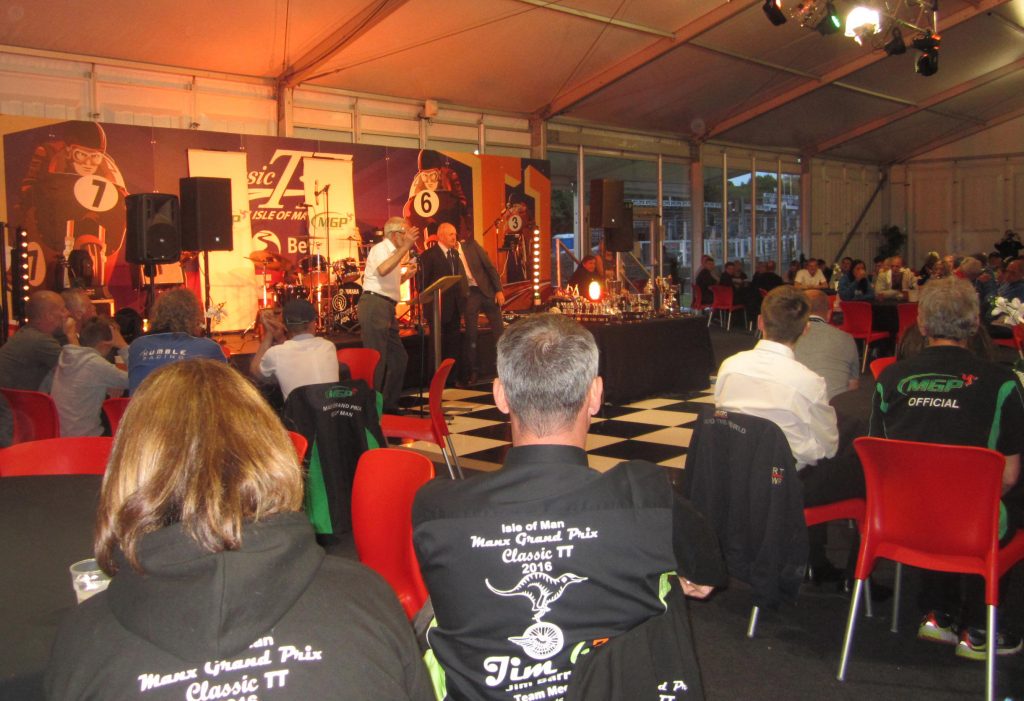 We were swiftly around to another race day on the Wednesday, during a week that seems to have absolutely flown by.

We went off to the paddock to catch up with our friends, as the next day we were to journey back home. We watched a couple of races from the Grandstand and met up with Dan, Janine and Darren. It was really reassuring to see Dan out of hospital and back in the paddock, albeit, wearing a back brace and supposed to be taking it easy.

John McGuinness (who had his motor home parked opposite the DB Racing camp), had been exchanging parts during the week with Dan’s mechanic, Darren and when John and I were there he came over to chat and to see how Dan was getting on, which was very thoughtful of him, he really is a nice “down to earth” guy.

As sponsors we joined Dan, Janine and friends for the evenings IMGold MGP Celebration Party Night & Newcomers Celebration where we met Jim Hunter for the first time. Larger than life, Dan proudly took his broken bike tail piece off his bike to the function to have it autographed by all the riders and later on in the evening he got up on stage and presented it to Jim Hunter to be raffled or auctioned for the benefit of the Hailwood Centre. 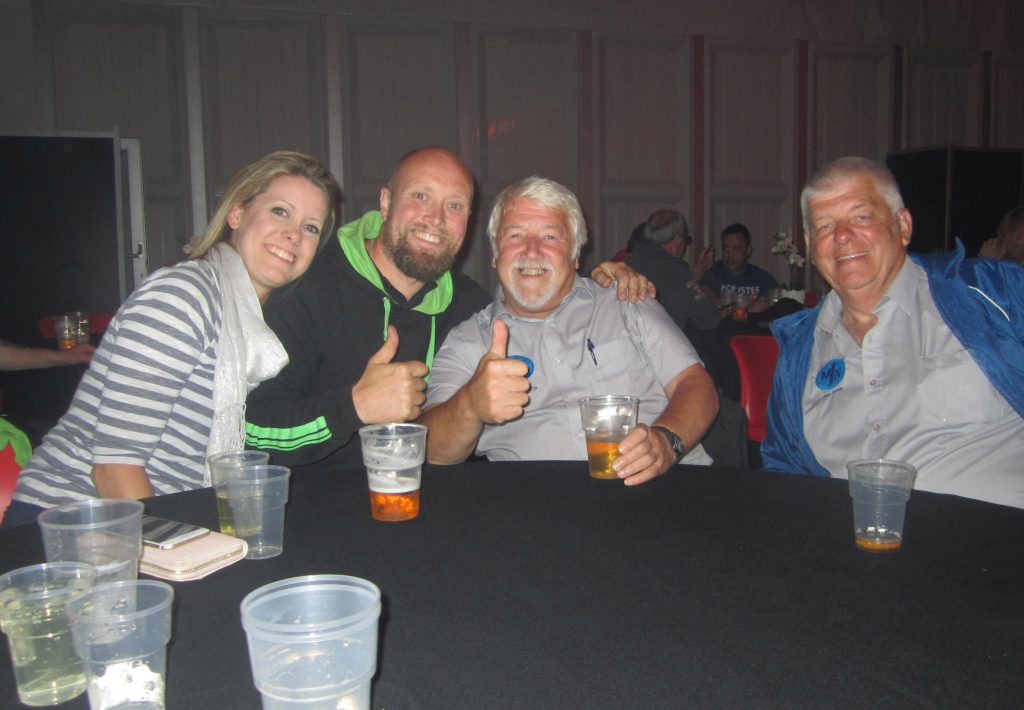 A great time was had by all, especially when Dan was told that due to his achievements he would not have to return to the Manx next year as a newcomer.

What a superb end to an excellent week of motorcycling, it doesn’t get much better than this! The only thing left to do was to remember to leave space in the top box and travel down to Devereau’s in Castle Street, (just off the promenade in Douglas) to fulfill family orders to bring back loads of delicious Manx Kippers!

The rain that had held off virtually all week started to creep into Douglas as we boarded the Manannan and we set off for a rather choppy crossing!Greatly concerned that we would go down to find our bikes strewn around the deck, it was a great relief to find that they had hardly moved.

To top it all when we alighted at Liverpool’s Pier Head for the journey home the weather was again extremely kind to us and we had a pleasant ride home.

What more could we ask for?

Can’t wait for next year.

For the actual results of the races, please visit