On 9th February 2011, Private Conrad Lewis became the 353rd British Soldier to be killed in Afghanistan.

His parents, Tony and Sandy Lewis (friends of Eddie Roberts) set up the Trust and it was our absolute honour to be able to spend time with them both personally at the Mallory Park Open Day in March 2014. Having spoken to Tony and Sandy beforehand John and I had the opportunity to present details of this worthwhile cause to our local VMCC members to ask for their blessing and support, prior to our attendance of the Open Day.

As usual, the generosity of our members was forthcoming and thus during the Mallory Open Day we were able to present Sandy with a cheque from our local VMCC Section and John and I promised to assist them further by fund raising at the forthcoming 2014 Mallory Bike Bonanza.

Eddie and the Real Motorsport Team at Mallory were fully supportive and with their blessing John and I took charge of the fund raising collection buckets and during the 2014 Bike Bonanza actively sought the help of the very generous motorcycle community and the visitors to the event. 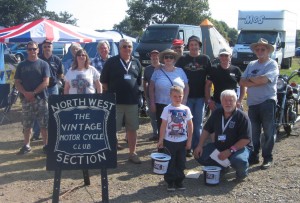 Half way round the event I met a little lad called Declan who wanted to help me with the collection and (after making absolutely sure that this was OK – with his Nan), he enjoyed accompanying me for quite some time rattling his bucket and collecting for the trust. After all of his hard work we thought it only fair to ask Declan to join us for a group photo of some of the members of the VMCC North West with our collection buckets. So, we would like to say a special thanks to Declan (and, of course, his Nan), our thanks to the VMCC members for looking after the collection bucket on our display stand and a special thanks to one of our other members, Christine, for her hard work in collecting for the Trust.

We left the sealed buckets with Eddie for Sandy to collect at a later date and once again it was our pleasure to be able to support a very worthwhile cause and help, albeit indirectly, the brave families and individuals of our Armed Forces who risk, and sometimes loose their lives, helping to keep every one of us safe.

353 is a charitable trust set up with the aim of helping members of the military community. As well as providing support to members of the armed forces and their respective families, the trust contributes towards a range of charities, including the Paracharity, the Parachute Regiment Afghanistan Trust, Nowzad Dogs and Troop Aid.