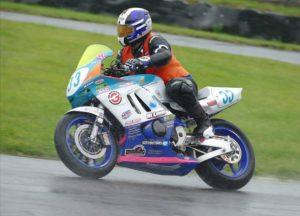 To say it was wet at PDMCC – Preston & District Motorcycle Clubs race meeting at the weekend at Three Sisters Race Course would be a major understatement. And it was also team rider, Pete’s 4? birthday on the Saturday.

Going into the event Pete was 1 signature away from upgrading to “Clubman Road Racer”, so a good result (or a finish in the conditions) is what was called for.

Waking up on Saturday, the rain, as forecast had started, and was to progressively deteriorate throughout the day. Wets fitted, kit on, and it was time to get out for qualifying practice. Pete qualified quite well, in 7th place which put him at the head of the 3rd row for the first race.

The team from PDMCC – Preston & District Motorcycle Club from the clerk of the course to the marshals (Thank you to the orange army for all you do) did a sterling effort to make sure that all classes got in a qualifying practice, with racing starting just after midday. 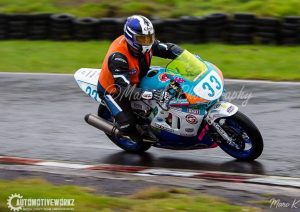 Pete was out in the 2nd race of the day, the qualifier for the Steel Frame class.

To say the weather was biblical would be an understatement. All credit to Martin Clare for going out and winning in those conditions. Pete finished the race in 9th place, and was happy to get back in to the pits. However, a finish was all that was required to upgrade his license, which is what happened !

The clerk of the course decided that after carrying out a track inspection, and consulting the weather forecasts for the day, conditions would deteriorate further, therefore the remainder of the days races were to be put back to the following day.

During setup for the races, or in packing up on the Saturday, Pete pulled a muscle in his back, which would have issues for Sunday….. 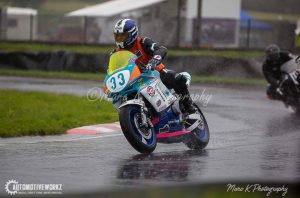 Sunday morning came, and the weather was better, but Pete was not. The niggle in his back became worse overnight, with him struggling to stand up straight. He decided that racing in that condition wouldn’t be ideal, and that he would be circulating rather than racing, and didn’t want to put himself, or other competitors at risk, so chose to sit out of the Sunday races. Disappointing, but safety HAS to come first.

Over the weekend, Pete was using his newly supplied Sealey Tools work station (modified to carry a set of wheels in tyre warmers), which turned out to be a fab piece of kit. Carrying out a wheel change was an easy task with all tools required easily to hand. In the heat of the moment in the pit lane, this would facilitate quick work.With this being the last race weekend for 2020 for the team, we would like to thank the following sponsors, 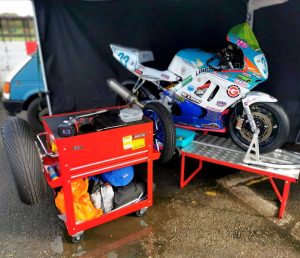 without whom, the racing wouldn’t happen.  And look out for a BIG announcement from the team coming soon.

Pete would also like to thank his personal sponsor’s / supporters for their continued assistance. Andrew Gilbert, Nigel White, and everyone else that has come along for the journey. Lets hope that next year, the whole team , can get back to the track together….

and thank you to Mark K & John Lockett for the images.