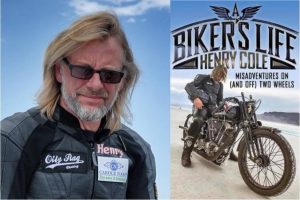 I can’t think of anywhere I’d less like to be than in a car. When you’re driving a car, you’re not taking part, you’re a spectator. You’re in a can; if it’s cold you turn up the heating, if you’re hungry you have a wine gum. You might be looking at what’s going on, but you’re definitely not a part of it.

A BIKER’S LIFE is the dramatic, humorous and candid memoir of one of the most recognisable names in motorcycling.

Henry Cole’s passion for motorbikes began when, at the age of eight, he was first introduced to a ‘man cave’. His great-uncle Redbeard’s corrugated iron shed was ‘stuffed to the gills with old motorbikes’ which Henry helped rebuild and ride. Since then, Henry’s life can be charted through the bikes and journeys he has been on – from a stifling public-school education, via many years battling addiction, to the big-sky iconic routes Henry has ridden for over twenty series as presenter of numerous TV shows.

This book reminds millions of motorcyclists why their bike gives them the freedom to be exactly who they want to be: to say ‘I’m doing my thing.’ When you ride a motorbike you become part of a  worldwide community of kindred spirits – those of us who will not be pacified by driving a car, but instead live for adventure, escape and the sheer thrill of the throttle.